Features
The Voice
On the Hill – Survey Says

North Americans love progress, and the catchphrase ?continuous improvement? has crept into every part of life. Industry spends countless hours creating charts to track how much better their performance is getting, and even hospitals and schools form committees to talk about it.

It’s behind every new and ?improved? version of the cars, makeup, and gadgets we buy. It might be good now, but we want it better, and we expect companies to put a lot of time and effort into?well, continuously improving.

So why in the world would anyone complain about applying that same concept to one of the fundamentals of our country?the voting system? Elections Canada is spending $1.3 million on making sure they’re getting things right, and the critics are already lining up.

Elections Canada plans to use opinion polls and other surveys to ?gauge satisfaction with its performance in the October federal election.? Around $900,000 will be spent on surveying voters, returning officers, candidates, journalists, and polling station staff.

And following an election that had the lowest voter turnout in history, Elections Canada is also going to talk to social groups where turnout was especially low, including youth and special-needs voters. The remaining $400,000 will go to the Canadian Election Study, a ?massive university-based survey of elections and referenda that has been taking place since 1965.?

It makes sense: if you want to make the system better, ask everyone involved what they think. New Brunswick MP Yvon Godin, however, claims there’s a cheaper route. ?If they want to do surveys without costing them anything, there’s 308 MPs they can consult,? he told reporters.

Great idea, if you want 308 of the winners to speak for 23.4 million eligible voters?a skewed sample group by any measure.

Winnipeg New Democrat MP Pat Martin has another money-saving idea. ?They’re throwing good money after bad,? he said. ?I could save them a lot of money, just reinstate enumeration and scrap the new identity rules.? Sounds good, except that the last enumeration (in 1997) cost taxpayers $71.4 million, a substantial share of the total $200.6 million spent on the general election.

No one wants their government to waste money, but in a multi-billion dollar annual budget, $1.3 million seems like a reasonable amount to spend on evaluating our electoral process. Every aspect of it?from the way It’s advertised to ID rules?influences whether we choose to go to the polls, and those election results dictate who sets the country’s policies. Critical stuff, and the debacle of the 2000 US election shows just how badly things can go wrong when such an important part of the system fails.

Reviewing Elections Canada’s performance may not solve every problem in our system, but if we expect continuous improvement in the products we buy, It’s the least we can expect from our democracy.

International News Desk – At Home: Easy Riding – Around the World: Older and Wiser 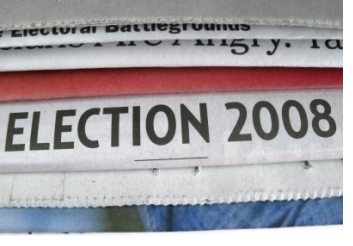 Canadian Fed Watch! News Across The Nation: Counting the Prison Vote, Changing the Way You Vote, and The Public Safety Act