Articles
The Voice
In Conversation With . . . Martin MacPhail of Theset

Theset, from Victoria, British Columbia, originally came together to write and perform one set of songs as an emo spoof.

Theset is currently touring Canada. The following are notes from a conversation between lead singer Martin MacPhail and Wanda Waterman St. Louis.

?What if the world is a living imitation of art.
Then where are we going and where did we start.?

from ?No Such Thing As Stars,? NeverOddorEven

Origin of the Species

Throughout high school our guitar player, Elliot, and I were both in bands together and playing on different projects. The rest of us didn’t really meet until after we graduated. We decided to get together to play this one show; we were being tongue-in-cheek about it because we were only going to perform one musical set, which is how we came up with our name.

We created the project to make fun of the emo music that was becoming popular. We wore really tight clothes, straightened our hair, wrote songs about our girlfriends, and just got up on stage and made a big joke about it. (you’d be amazed at how many things in my life have started from jokes.)

Once we got on stage together we realized we had really good chemistry and a lot of fun playing together. So we decided to take our project a lot more seriously. We started writing songs that meant a lot to us and pushed our music forward, then we released our first album, The Philosophy of Time Travel, in 2006.

On this album we’ve been much more methodical. NeverOddorEven is very detailed in terms of the lyrical concept, and the palindromes are indicative of the theme.

we’re definitely not a singer-songwriter get-up; we write as a band. For each song on the album a different member may have brought forth the idea or the riff in the beginning but the words and the music are all written collaboratively. I write most of the lyrics but the band has input into that just as I have input into the music. 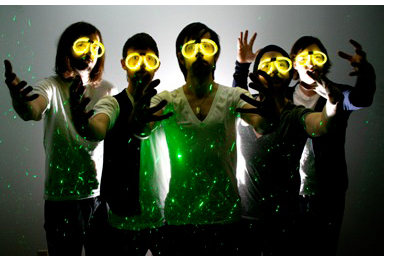 It’s different for each song but for me It’s usually the melody that comes first. I know different people write in different ways but for me when we’re jamming I like to hum along and create different melody ideas to find something that I like and that will give me a structure to put the lyrics into. The lyrics depend on the mood or the atmosphere of the song and what it says to me.

With this album we decided to create a kind of cinematic experience. I experience music very visually. When I listen to my favourite bands I play scenes in my head. This is definitely the way this album was written?I pictured it like a movie.

I really enjoy movies and shows myself and one of the things I pick up on is the clever use of music. I just saw The Wrestler last night?the music in that movie is very minimal but very effective. It’s just simple guitar lines but it really brings out the emotion in the scene.

I did the first year of a degree in astronomy and physics at the University of Victoria. I’d love to finish my degree sometime but can’t right now with all the touring. Most of the books I read tend to be about general relativity and quantum physics and modern string theory. This plays a role in the scientific, sci-fi element in our music.

One book I would recommend to anybody is The Elegant Universe by Brian Greene. It starts with Einstein’s theory of general relativity, moves into quantum physics, and then describes how those two theories aren’t compatible. The nice thing about this book is that It’s written for people who aren’t educated in this field.

The way I think about the world definitely affects the way these songs come together. It fits the general public perception that we’re on a downward slope with the world heating up. NeverOddorEven is specifically about the sun going out.

Music to me is like a painting?there are just so many words and feelings associated with it. But I think of music as the most powerful art form or medium because you can close your eyes and it will totally take you somewhere else visually and emotionally.

I think that I would be creating music in any circumstances. It’s something that comes naturally to me and to the other members of the band. For us It’s a very natural expression of life. I think that one of the important things about our music is that It’s interesting because of the group of people that created it. It’s totally the band’s chemistry that makes the music what it is. That to me is the most important thing.