In my last article I described how Israeli settlers overcame the dichotomy of school smart/life smart by forming communal farms known as kibbutzim. In the lands of Palestine, which are currently occupied to varying extents by the state of Israel, education has taken a different turn. Perhaps nowhere else can postmodern social theory be better applied than here. Postmodern theory is based on a presumption that a distinct ending in time and space has occurred; an ending of modernist narratives of certainty encompassing identities and truths and nations. ?A radical implosion has happened and we have survived ?beyond the end,? beyond a situation that could be grasped by our earlier categories of rational or dialectical thought.?

For the Palestinian people just such a cataclysmic break occurred in 1948 with the creation of the modern state of Israel. Palestine then developed a school curriculum that differed from those found in Canada or in other countries. Palestinian children found themselves reading textbooks from other countries rather than their own. When textbooks finally were written, students did not learn of their country from modern maps. Instead, a blurry pan-Islamic identity was taught and bolstered by map references to ancient cities that no long exist.

Even today, rather than hard, firm, and stolid lines normally used to demarcate modern nation-states, broken lines symbolic of ephemerality and impermanence are the norm in today’s Palestinian textbooks. The provisional and fluid nature of Palestinian education practices has been seen very differently by Israel and many Western commentators. In line with traditional modernist thinking, textbooks that tend to elide (leave out) references to Israel are denounced as incitements to anti-Semitism and attacks on Israel.

The history of education in Palestine is irrevocably and ironically tied to the creation of the state of Israel in 1948. Parts of Palestine, the West Bank, and Gaza were controlled by Jordan and Egypt at this stage. Students in West Bank and Gaza areas received textbooks from the controlling countries. Twenty years later, in the War of 1967, Israel ?occupied both areas and maintained the existing curricula? as well as ?censoring material that it found objectionable.?

Attempts by Israel to introduce new textbooks were unsuccessful. Another important development took place in 1994, when a new Palestinian National Authority (PNA) was given control of education in West Bank and Gaza. The PNA subsequently began working on new textbooks, which were introduced during the first years of the 21st century. Palestinians, then, experience their identity as members of a conquered and colonized land; it is against this backdrop of resistance to occupation that schools in present-day Palestine exist.

Controversially, ?virtually every discussion in English on Palestinian education repeats the charge that Palestinian textbooks incite students against Jews and Israel.? The reality is much more complex, however, and is in part explainable by the postmodern theorist Jean Baudrillard’s description of how ?the worst error, the one committed by all our revolutionary strategists, is to think they can put an end to the system on the real plane: that is . . . the imaginary which the system itself imposes on them, a system that lives and survives only by getting those who attack it to fight on the terrain of reality, a ground that is always its own.?

Instead of rhetorically attacking Israel as critics maintain, and perhaps as many Palestinians would prefer, Palestinian textbooks ?go to some lengths to avoid saying anything about Israel at all.? To ignore a people or nation from perceptual reality is certainly a form of attack, though perhaps an act more at the level of implication than provocation. In a sense, the Palestinian textbooks seem to, in the famous Christian sense, be ?turning the other cheek.? 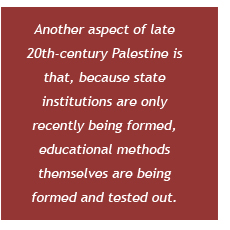 It is not only in regard to relations to Israel that Palestinian textbooks differ from the Western cultural norm and embrace a somewhat surreal or imaginative version of truth. For instance, ?in explaining the concept of species, one of the new books explains that animals that are not alike cannot ??marry? and have children.? This anthropomorphizing view seems akin to our culture’s Aesop’s Fairy Tales or Mother Goose Nursery Rhymes than to what we would regard as a school textbook.

Another text describes a family taking a drive to the city of Jaffa and ?smelling lemons and oranges along the way.? The extra-temporal nature of this trip is made clear: whereas the road to pre-modern Jaffa did indeed meander amongst orchards, ?current Palestinian driver entering the city will pass through densely populated suburbs and traffic and are more likely to smell diesel fumes than oranges.? This sense of Palestine as a nation that surpasses the boundaries of the real is less a desire for a return to an idealized past as it is a creation of an alternative reality in the present. One is reminded of the way children in our schools become engrossed in books such as Harry Potter. In Palestine, the stark and dangerous conditions of daily life perhaps lead to more earthbound, though no less fantastical, alternative realms.

Another aspect of late 20th-century Palestine is that, because state institutions are only recently being formed, educational methods themselves are being formed and tested out. Rather than ask ?What body [of] knowledge should students be taught?? curriculum planners are asking ?What kind of citizen do we want??

Recognizing that ?we have been conditioned to be passive participants in the teaching process? leads educationists to create ?institutions friendly to innovation and reform.? In 1989 ?the Tamer Institute was founded in Ramallah; in 1991 Al-Mawrid Teacher Development Centre was established in the same city.? Both of these teacher-training schools set as their goal the teaching of democracy ?not through abstract political instruction but through the case method, focusing on contexts the students could find immediately applicable to their own lives.?

A Palestinian theorist named Abu Lughod is credited with introducing the term ?empowerment (tamkin) into Arabic.? Also important for new teaching methods in Palestine are the concepts of ?critical? and ?creative? thought as compared to ?memorization? and ?treating students as ?empty vessels.?? Underlying the new focus of progressive education in Palestine is the very postmodern notion of decentralizing authority from a singular, absolutist centre, head, or ?tree,? to a context that is grassroots, spreading, or ?rhizomatic.? In the classroom this means power moves from instructor to pupil. ?The shift from teacher’s authority to student’s individuality, from absolute to relative truth, from receiving knowledge to discovering it, from uniformity to pluralism, from constituting a dutiful member of society to fostering an active and freethinking citizen? all combine into a goal of educating young Palestinians to be responsible and freethinking members of the global human community.

Rather than spread a ?culture of violence,? the hope is that Palestinians will spread the love and compassion endemic to the beliefs of their religion and nation. 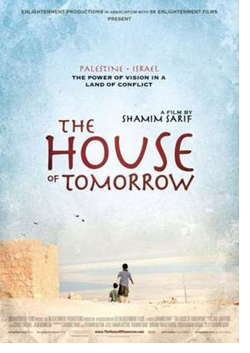 The Mindful Bard – The House of Tomorrow