?What is the modern? It’s no longer the primordial model; it’s the clash and the coexistence of two different models at the same moment. The modern says, ?I’m the master of my life, but at the same time I’m overwhelmed by the intensity of my life.??

Francesco Casetti in an interview with Wanda Waterman St. Louis

In the first week of filming, writer-director Samuel Maoz felt a sharp pain in his leg. Within a day or so, what should emerge but bomb fragments, shards that had become lodged in his leg during his service for Israel in the Israel-Lebanon war in 1982.

The entire film is seen from the inside of a tank, the world outside seen only through the lens of the periscope’s gun sight. But in fact the channel through which we watch these events unfold is the eye of shooter Shmulik. His brain is the filter through which we interpret the heart-rending violence, both within and without the iron shell. Schmulik’s eye is at the same time a door to a soul becoming progressively damaged by the incidents it witnesses, scenes as lethal to the psyche as phosphorous to flesh.

Yes, this is the story of a specific time and place (the First Lebanon War, of 1982), but as time goes on the tank becomes the universal body and the war throbbing outside the tank becomes the human dilemma. The mission of these four boy soldiers is to make sure that a mercilessly shelled town in southern Lebanon has left no survivors, in essence to finish someone else’s genocide, and they are as vulnerable and unprepared as toddlers.

Those of us who have a soft spot for one-set wonders (e.g. Clerks, Friday, and Who’s Afraid of Virginia Woolf?), in which the action is confined to one location for most of the film, might well wonder: do such geographical restrictions enhance the drama or present an obstacle staged to show off the talents of a superlative director? I’m guessing a little of both, but for certain this kind of drama is utterly engaging. And Lebanon is a stunning example.

The acting is brilliant, but a standout performance by Zohar Strauss (who ironically comes across in the extras as the most shallow actor in the group) is the crown. His channelling of conscious inner conflict, like the best work of Al Pacino or Denzel Washington, expresses a full?and jarring?awareness of a deathly despair. 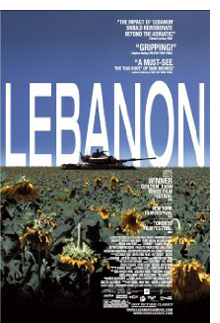 The cinematography is often gasp-worthy. The painfully realistic close-ups of destruction are completely devoid of action-film glamour, the banality throwing a curve ball. It really is so much worse when you leave out the bells and whistles.

A pan of sleeping soldiers draped over different parts of the tank’s interior is like a classical bas-relief. A venerable old Arab sitting across from his slain companion at a café table and staring fearlessly into the tank’s periscope is godlike. And hundreds of cigarette butts, smoked to the quick, floating on the tank’s watery floor, become the flotsam of an absurd universe. A donkey is lying still on the ground with its stomach blown up. The gun sight zeroes in on the donkey’s face and sees that the donkey’s nostrils are quivering and that a great tear has rolled down its panting cheek.

?My body was relieved of all the shards of Lebanon,? says director Maoz in an interview on the DVD. Is this not one of the highest things that can happen to an artist?that in response to the courage of the artist’s truth-telling, the physical world rises in a miraculous embrace?

Lebanon manifests six of The Mindful Bard’s criteria for films well worth seeing: 1) it integrates art with social concern, saving me from both seclusion in an ivory tower and slavery to someone else’s political agenda; 2) it inspires an awareness of the sanctity of creation; 3) it displays an engagement with and compassionate response to suffering; 4) it poses and admirably responds to questions which have a direct bearing on my view of existence; 5) it renews my enthusiasm for positive social action; 6) it makes me appreciate that life is a complex and rare phenomenon, making living a unique opportunity (Cybiont). 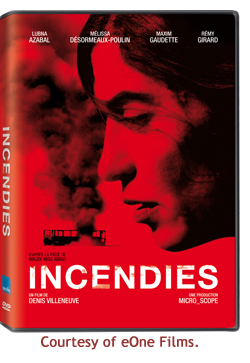