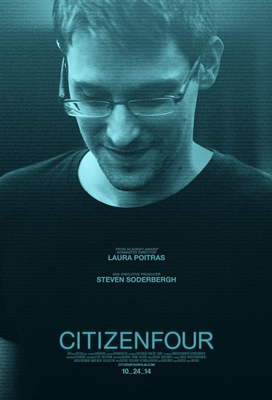 “First of all, Americans? justification for everything since the September 11 attacks is terrorism. Everything is in the name of national security, to protect our population. In reality It’s the opposite. A lot of the documents have nothing to do with terrorism or national security, but with competition between countries, and with countries? industrial, financial, or economic issues.”
– Glenn Greenwald, quoted from Citizenfour

“What is surveillance if not control?”
– J. Appelbaum, quoted from Citizenfour

When as children we watched the scary monster scenes in children’s films, our mother would comfort us with these words: “It’s not real? It’s just a movie.” You might find yourself trying to do the same while watching Citizenfour, only this time it wouldn’t be true.

The genius behind this spy thriller/documentary is filmmaker Laura Poitras, who, in early 2013, received an anonymous, encrypted e-mail message from someone who called himself “Citizenfour.” Citizenfour said he had evidence of illegal surveillance programs run by the USA’s National Security Agency (NSA), which was also collaborating with other intelligence agencies worldwide. That summer, Poitras and journalists Glenn Greenwald and Ewen MacAskill flew to the Mira Hotel in Hong Kong to meet with Citizenfour, a.k.a. Edward Snowden, a high-level analyst whodunnits’d worked for the NSA as a private contractor, and who had also been a senior advisor for the CIA.

Within eight days Poitras had her footage for the movie Citizenfour.

At first we’re calmly in support of Snowden, and we can’t help but admire him; he’s both earnest and self-possessed, and when he talks about the moral imperative to step forward and bring the wrongdoing to light It’s like Lafayette has traversed the centuries to remind America of the values that inspired its founding.

But we can’t help but sense a growing trepidation for the heap of trouble Snowden is bringing on himself. As the dark forces start bearing down on him he’s no longer the brave warrior leading the battle but rather the little boy who pinged the back of the teacher’s neck with a peashooter; it was cool when he did it, but do we still want to be known as his buds when the teacher wrathfully turns on the class and asks who did it?

Thankfully Snowden has friends in?maybe not high?but at least influential places. Julian Assange and Wikileaks muster their forces to save him from facing felony charges in the USA, and a troupe of well-qualified international pro bono lawyers arrive to help him plot his next move.

The felony charges are supported by an outdated World War I era law: The Espionage Act. This is a very general act created to deal with spies, not whistleblowers, but It’s the biggest stick the American government can find with which to beat Snowden because it conveniently fails to distinguish between whistleblowing and the selling of secrets to foreign powers.

But That’s Snowden’s story. What are we, the viewers, to make of the news that America has broken its own laws, not, as they insist, to protect Americans from terrorism but clearly to further the international interests of government and big business?

There are two basic responses to the growing awareness that Big Brother now has the power to watch you almost all the time: 1). a blasé, “I have nothing to hide” attitude, or 2). a sudden, paranoid urge to keep glancing over your back, wondering if the extra number of service vans outside or the fire alarms calling you away from a clandestine meeting are indications that You’re being stalked by Uncle Sam.

Neither is an appropriate response. You’re as vulnerable to surveillance in your own living room as you are outside, because the National Security Agency’s modus operandi includes the use of the communications technology that surrounds you right now. And unless there’s some reason to term you a “person of interest,” there may be nothing to worry about. There’s so much information no one could possibly look at it all.

On the other hand a blasé attitude is a little reckless considering that the American government is now free to form a picture of you and act on it, and you have no way of explaining that typing “transsexual porn” into your browser was a test of your pc’s parental controls, or that You’re talking online with people in the Middle East because you need to practice your Arabic. You have no chance to explain that the terrorist you just gave money to on the street had fooled you into thinking he was a homeless man. You have no way of defending yourself when they find that your boss the embezzler happened to call you, the accountant, into his office a record number of times before wiping out his clients? retirement funds. Once they’ve formed that picture, It’s in the system, and it may be nearly impossible to erase it without collateral damage.

Obama, who, during his campaign for the presidency, insisted that it was time to stop bending the rules in favour of government initiatives is hostile to Snowden’s disclosures. It would have been better, Obama states, to have a “fact-based debate” on the topic of government surveillance. But how could a “fact-based debate” have been possible had someone like Snowden not brought the facts to light?

In recent years, when Americans justified foreign wars by claiming to protect democracy, the hypocrisy made us mad. Or very sad. After watching this film It’s going to be really hard to hear this lie without collapsing in peals of hysterical laughter.

Kudos to Poitras for having the techno-savvy for keeping it all secret until we could all see it. The woman jumped through hoops to ensure that Big Brother didn’t get its paws on any of the footage, from constantly moving around the world in order to stay one step ahead of the FBI, to using encrypted drives with multiple levels of nested protection, to repeatedly changing the location for the initial screening, she was brilliantly adept at avoiding the kibosh; you can see why Snowden chose her to leak his story to. And It’s heartening to see how well the technology has evolved the capacity to protect itself.

The site Fandor has published number of articles and videos about Citizenfour, including this interview with Laura Poitras.

Citizenfour manifests four of the Mindful Bard’s criteria for films well worth seeing.

– It poses and admirably responds to questions that have a direct bearing on my view of existence.
– It stimulates my mind.
– It renews my enthusiasm for positive social action.
– It makes me appreciate that life is a complex and rare phenomena, making living a unique opportunity.

The “War on Terror”: Sense and Nonsense