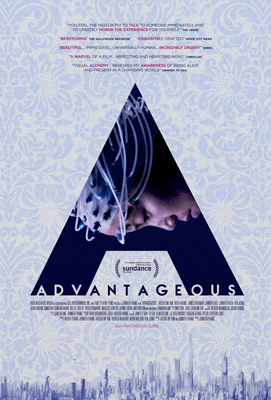 “It’s good to be humble, but you need to know your value. The wisdom, the ideas, and the kindness in you? That’s the secret beauty everyone wants.”
– quote from Advantageous

Advantageous is a valuable addition to the tradition of Brave New World, 1984, Fahrenheit 911, The Stepford Wives, The Matrix and just a few more science fiction books and films that have something meaningful?and verifiable?to say about our current conditions.

We witness a prosperous but unstable urban society at some point in the next century. The news reports not only on growing terrorist acts, but also on the growing levels of child prostitution, something to be expected in a society that commodifies human beings as soulless sex objects.

As in all the best science fiction, the film holds a mirror to the present. Which aspects of the present? The current plight of women and girls, for one thing. Today feminist consciousness and solidarity are at an all-time low, as laid out in the book Getting Real: Challenging the Sexualisation of Girls and this means that women are sometimes their own worst enemies.

Gwen Koh and her daughter Jules live a charmed life. Jules is a brilliant student. Gwen is blessed with the position of spokesperson for the Center for Advanced Health and Living‭, ‬a bland moniker for a huge biotech corporation catering to ‭the human need for one-upmanship. (A flashing sign on a building broadcasts the company’s confused ideology: “Be the you you were meant to be.”) But their days of prosperity are numbered as Gwen grows older and levels of female unemployment burgeon as‬ Gwen’s supervisor reveals that there’s a move on to keep more women out of the job market so that the men can find enough work and thus feel better about themselves. ‬‬
‬
Competition is destroying the lives of the women around them. Gwen and Jules frequently hear sobbing from the woman upstairs, the woman downstairs, or both. As Gwen goes to her appointments she finds a woman sleeping under a shrub, another fishing to sustain herself.

Contrast the high-pressure competitive spirit of this society with the tenderness of the two consecutive opening scenes and your heart will melt. In the first Gwen and Jules sing together at the piano in sweet harmony. In the second Jules and two friends dance in slow motion down the street, one after the other, carrying their books and musical instruments. If you already know that this film has something to say about the untouchable majesty of the female, you can’t miss the melody: girl, you are so, so beautiful, just the way you are.

But competition must keep rearing its ugly head. One of the girls initiates an age-old word game, and you see how intensely the urge to win rules these precocious damsels. A flashing sign advertises a school enrollment lottery, a bizarre development That’s nonetheless a firmly entrenched reality for many American public schools today.

The head of Gwen’s company is a jaded, icy boss lady who manipulates Gwen by making her feel disempowered, and Gwen is clearly terrified that she won’t be able to make a decent living, leaving Jules to fall through the cracks. She wants her daughter to be able to enter an expensive “bonding camp,” the initiative of a group of single-minded moms with a fascist zeal to turn their offspring into an elite class.

Jules is definitely on board, but the self-improvement dogma of this society sometimes rings a bit hollow for the inquiring mind, especially when the future presents such a narrow corridor of hope. In one scene Jules remarks sadly, “I need to be better. But why?”

Gwen knows what matters, and teaches her daughter well: “It’s good to be humble, but you need to know your value. The wisdom, the idea, and the kindness in you? That’s the secret beauty everyone wants.”

In spite of knowing what’s right, Gwen makes a tragic sacrifice for her daughter. But, if you look closely, you see that it had been her intention to give up her individual consciousness in order to enter a higher consciousness that transcends individuality. Ultimately this is what it means to live in love?to lose the ego’s boundaries in order to become one with the objects of our love.

Christianity plays a salient, though background, role here. Gwen’s father is a minister and her mother preaches to her about her sin. She and Jules celebrate a blessed Christmas during which they sing a carol about the birth of the divine child. And of course, there’s the sacrifice she makes of herself, one that has striking parallels with the gospel story.

The film sports exquisite cinematography with loving attention to meaningful details like dry leaves, a dead butterfly, gorgeous abstract water sculptures, the texture of a woodland path, or strands of hair caressing a cheek. All of these visual treasures meld beautifully with a soundtrack That’s utterly unconventional for sci-fi, with acoustic instruments and the loveliest of found sounds.

Set designs are remarkable too; I love Gwen’s apartment, filled with books and wabi sabi antiques?just the kind of home you’d expect for an intelligent, frugal woman who loves beauty and isn’t concerned with showing off. They were so wise not to have gone populuxe with this.

Advantageous manifests eight of the Mindful Bard’s criteria for films well worth seeing.

– It’s authentic, original, and delightful.
– It poses and admirably responds to questions that have a direct bearing on my view of existence.
– It stimulates my mind.
– It provides respite from a cruel world, a respite enabling me to renew myself for a return to mindful artistic endeavor.
– It’s about attainment of the true self.
– It inspires an awareness of the sanctity of creation.
– It displays an engagement with and compassionate response to suffering.
– It makes me appreciate that life is a complex and rare phenomena, making living a unique opportunity.

AUSU This Month – Coalition for Student Loan Fairness; AUSU Frappr – Show Us Where You Are!