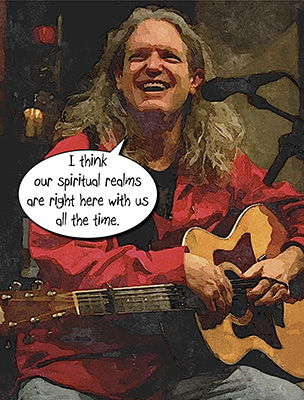 I try not to use a word like ’wrong,’
But I carry a torch.
It burns my hand.
I’d like to lay it down
In the Promised Land.
—Sam Baker in his song “Angel Hair”

The first 20 years of the new millennium have witnessed 9/11, the Istanbul explosions of 2003, the New Delhi and London bombings of 2005, and other attacks in Norway, Moscow, Madrid, Mumbai, not to mention many smaller attacks worldwide, carried out by a range of terrorist groups with different stated motives but sharing the goal of confusing and crushing the enemy’s spirit by force, without negotiation or compromise.

Despite the fact that terrorism has proven itself futile in the pursuit of political goals, marginalised young people the world over are still being persuaded to sacrifice their lives to kill and destroy in the name of religious dogma, nationalism, and ideology.
Terrorists are the new barbarian invaders, and the whole world has become a Rome in decline.

What does all this have to do with music? To start, the elements that have completely changed the making and experience of music in our time (i.e. the giant leaps of digital technology) are the same elements that have changed the nature of terrorism, making recruitment and logistics easier, faster, and cheaper, and the experience more immediate, universal, and lasting.

According to Ian Johnson’s, A Mosque in Munich: Nazis, the CIA, and the Rise of the Muslim Brotherhood in the West, the Holocaust and Cold War puppet-masters didn’t retire with the Allied victory: their legacy lived on in a series of little known political strategies resulting in today’s international terrorist groups using the same weapons, training methods, tactics, and even aggression-inducing drugs that the Nazis, Stalinists, and the CIA used to train their predecessors in the service of their own attempts at global dominance. And just as their Nazi, Stalinist, and CIA trainers before them, the new terrorists regard their followers as just so much cannon fodder.

Digital technology and the Internet have also rendered the experience of terror more effective and permanent. Not only do we live in fear of unwanted surprises, when the nightmares arrive we can then watch them again and again on YouTube, to the detriment of collective mental health. Despite advances in technology and reams of research suggesting that trauma must be treated immediately, psychological services the world over have woefully failed to step up to the bat.

How might musical artists help us heal and get back to the garden, if in fact we’ll find a garden in the end? It’s complicated, which is why we’re looking at the story of one who survived a terror attack, emerging with an awakened sense of what really matters.

Sam Baker is a singer-songwriter whose perspective changed while recovering from a bombing by Peru’s Shining Path, a militant communist group. Carrying in his body the wounds of a country long at war with the unknown, Baker’s terrible suffering had the effect of deeply connecting him with humanity.

He’s not the first American terror survivor, but he’s certainly one of the most eloquent, his slow recovery coinciding with the burgeoning of a compassion that informed his songwriting. Though rightfully hurt and angry, Baker moves past blame and bitterness to envisage a world wherein we awaken from the collective nightmare to accept and love each other in all our beauty and baseness.

In an interview with Dan Forte for Wood and Steel Magazine Baker described what it was like being close to death for weeks, unable to move: “It was an interesting time. Very introspective. The only thing that came in loud enough to really get through that haze or fog or internal trauma I was dealing with was the raw suffering of others.”

Sam’s spiritual focus suggests one of the most prominent but hard to realise teachings of Zen Buddhism?the importance of living in the now. As he said in the Voice interview:

“What if everything is perfect right now? By perfect I mean whole and complete, all you need available to you at this very moment. It doesn’t mean you’re not responsible for making things better. We should all be more responsible and more compassionate, but what if it’s you in the face of God this second? You can then get outside of yourself. This whole thing where you and I are separate and look at ourselves as if we were players on a football field?we can get past that.

“God is in every face we meet, and not just in every face?in every plank of cedar that’s tacked onto the outside of our houses, in the rosemary that grows in the yard. The question then becomes: How can I learn not to turn away?

“What I saw in that terrible thing in South America is that we’re all essentially connected. There’s an attitude that says, ’I’ll wear this red hat or this white hat and because of that I have something that gives me access to a different spiritual realm.’ I think our spiritual realms are right here with us all the time.”

His songs, slow, tender, minimalist, and reverent, manifest a grittily beatific vision of the saints and sinners of Texas, a rich microcosm of the world at large. The cryptic lyrics are set to music so evocative of the open prairie that you can almost smell the sagebrush.

Yes, Sam Baker was a milestone in my career as a professional listener. But the subject of senseless violence wasn’t done with me. An online encounter with Kurdish oud-player Mustapha Mallabozan at the start of the Syrian Civil War opened my eyes to a truth almost too frightening to acknowledge.

Editorial – The World Beyond Our Media

Editorial – The Social and Cultural Significance of Borscht, Part II