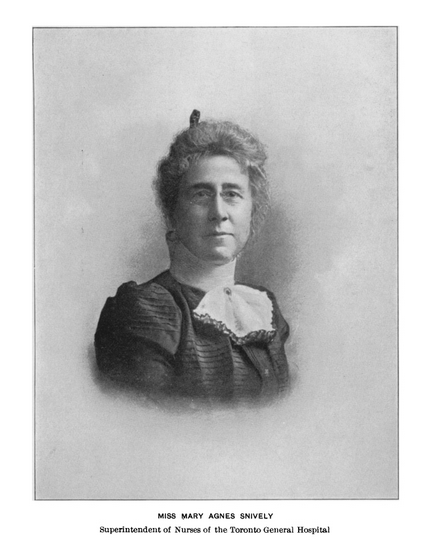 Mary Agnes Snively was born on November 12, 1847, in St Catharines Ontario and died 85 years later on September 26, 1933.  She never married nor had children.  Snively was an educator and a nurse who was known as the “Mother of Nurses in Canada.” After graduating high school Snively taught for almost twenty years.  At the urging of a close friend who was a nurse, in 1882 Snively attended New York’s Bellevue Training School for Nurses.  Upon graduation she was hired as Superintendent at the Toronto General Hospital.  Mary Agnes found the conditions at Toronto General Hospital unacceptable and began implementing changes.  Seven nurses and twenty-seven nurses in training, were required to care for almost 400 patients.  The hospital was completely unorganized with no schedules, record keeping, or procedures for obtaining supplies.  The Nurses’ living quarters were deplorable.  The rooms were barely heated and the nurses slept on straw beds and ate their meals in a small room opposite the boiler room.

The changes Snively put into action included establishing an updated curriculum for the student nurses that incorporated scheduled lectures by physicians.  She also included a written examination at the end of a two-year training period.  Snively strived to assign menial tasks to other workers so the nurses could concentrate on caring for patients.  Intending to attract middle class women into the nursing profession, Snively convinced the hospital to build a residence for student nurses.  The new residence was completed in 1887 and included a library, dining rooms and sitting rooms.  As a result, well-educated women were beginning to show an interest in attending, and by 1894 the Toronto General Hospital Training School for Nurses became the largest in the country.  She also cofounded the International Council of Nurses, and, from 1900 to 1904, she was the Honorary Treasurer.

Mary Agnes Snively was known for her compassion and dedication to the well being of patients.  She was named as the first president of the Society of Superintendents of Training Schools for Nurses in the United States and Canada, holding that position from 1908 to 1912 and was able to bring together provincial organizations and alumnae which eventually formed into the Canadian Nurses Association in 1924.

The following quote was taken from a speech that Snively delivered at a 1904 graduation ceremony in Cleveland Ohio and was published in the American Journal of Nursing:

The Canadian Historic Sites and Monuments Board hung a plaque in honor of Mary Agnes Snively, at the Toronto General Hospital.

[Most students at AU are women. It always made sense, then, to have a column dedicated to highlighting courageous and/or successful women, and as such, we really can’t claim it’s the “Best of the Voice” without one. This one, from the March 22 edition, was the most popular of all  those published over the past year.]