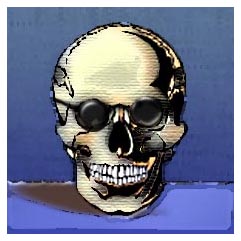 The five days spent in Edmonton were butt kickers. I remember a similar thought running through my head during Cranio level one. It was different then– you’re a beginner and Cranio rhythm is confined to a book and maybe treatments from others. Suddenly you learn to feel them. You strain hard to “hear” the rhythm through your hands. How do you learn to trust your fingers? I also remember touching people with minimal pressure and finding there are monstrous pains to be had in head spots!

This time around we’d all mastered the first level’s lessons and now had to advance our thinking. It isn’t all study of books and writing in these cranio courses:there’s the bodywork that leaves you zapped and out of it by twelve noon. Each night is a different story. “I got the deepest sleep in ages” or “Worst nights sleep in a long time.” Often people would come in rarin’ to go the first day and then look like a Charmed TV show demon hit them a few times thereafter.

It isn’t that the seminar is so tough that we get so totally run down. It’s the work on one another multiple times per day that leaves you like that. As I said in my last article, one has to process all these changes internally:like rewriting a program. I remember being the Charmed show version from noon on Friday to the end of Saturday. I was in good company. The woman next to me, C.R. was also in that category. All we wanted was to get out and go home. Our brains seemed to scream, “Enough!”

Our instructor understood what was happening and when it was in effect. That morning she asked how people were feeling. We stared and grumbled. She laughed and told us by day’s end we’d be okay. Notreally:but most of us felt better.

The practices are advanced to say the least. We found that many participants’ bites changed:everyone noticing it was better not worse. Then it was amazing to watch old scars and surgeries cease giving hidden troubles with the simplest techniques imaginable. Imagine the surprise when we found that some people erased years old pain and headaches that had evaded all forms of treatment.

I’ll enjoy telling you one final – truly joyous tidbit from this course. My girlfriend D.B. who let me stay with her let me practice on her. As I said in my last article, she looked exhausted and had serious troubles breathing when I arrived. But I worked on her daily. I used each technique in a modified way to deal with her oxygen mask and the fact that she couldn’t lie down for treatment. I watched in amazement as this incredibly laid back woman clicked and popped in her jaw and then remarked that her sinuses were “significantly better.” This happened twice. And now the punch line:her bladder control improved overnight! I was SO impressed.
Diane was too. She asked when the next course was. And was I coming there? I was welcome to stay with her.
I’m sold. I’m impressed. I’m bushed and I’m rarin’ to go for another course. The next time, though, I’m going to buy a warmer jacket, and a pair of slip-on shoes.