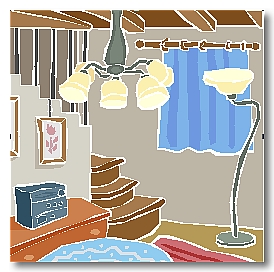 Spring cleaning, or fall cleaning. Some of us like to us like to clear out our junk before the warm weather arrives; others pull out the brooms and dustpans as the summer fades. The changing of seasons marks the years, and we are reminded to clear out the clutter when we rake up the leaves or take out the mowers and sprinklers.

I spent all of yesterday cleaning my basement. Not because I am suddenly motivated (although I’m proud to say that after 5 years in our house, we finally reorganized the entire main floor last month, and it was entirely of our own motivation), but because my father is coming from Quebec for an extended visit, and right now he won’t fit in the basement, let alone be able to live in it.

We started yesterday around 11:00 am, and ended around 1am. The job is only about half done, and my deck and living room are filled with bags and boxes to be sorted, donated, recycled, and repacked. I can’t believe the amount of stuff we have down there, nor do I know where most of it comes from? We found things my husband and I have never seen before. I’m quite certain that my neighbors sneak in when we’re out and store some of their junk down there.

I know I’m not alone in this. Everyone with a basement seems to have the same problem. There are the items you got rid of, but they keep coming back. I have a Christmas print cake tin filled with Tupperware beverage glasses that I’ve given to the Sally Anne 3 times. I found them again yesterday. My husband rolled his eyes and swore that he took them to the donation bin last year. Hmm:.

Doing up all of the accumulated laundry revealed that I have two identical copies of the same black shirt, which I only had one of before: Same brand, same style, same relative age and wear. I had no idea that shirts bred. Why can’t my favorite jeans do that?

I found receipts for stereo equipment that my ex-boyfriend bought, and I have not seen him in 8 years. I thought I’d burned all that stuff when I went on the big “?wash that *hole right outta my hair’ rampage of 1996.

Also in the basement: Assignments I wrote in high-school, a steel sandwich grill with analogue temperature gauge that belongs in a museum, a dial phone that weighs ten pounds, some funky 60s smocks that my mom wore (and that are nearly back in style), an under-the-couch stockpile of 100s of balls of crumpled paper, coupons, receipts, twist-ties and pop caps (my older cat watched with moist saucer-eyes as we swept her stash into a bucket), a fat black spider in a thick cottony web that probably was the work of months (I vacuumed him up because, you know, they say nothing can live in a vacuum {heh}), my husband’s boy-hood snow pants, a full-sized weight bench, a stack of 5 year-old newspapers that should have been recycled, a wooden spinning wheel that belonged to my great grandmother (who I never met), 2 extra sets of speakers, a small graveyard of useless appliances, an extra stereo and computer, and 2 spare CD Rom drives – just in case. I figure I could get $50 for the lot of it.

At least 90% of my clutter is made of paper. A company has developed a way to make cement bricks from shredded paper, and you can build houses out of it. Let’s say I’m about 30% of the way toward my dream home.

Not only do I have no idea where most of it came from, I wonder how many years I’ve taken off of my life moving this crap from house to house. We’ve been toting around a broken floor lamp for 5 years.

One of the bulkiest items, and the hardest to store, is a 30 year-old tricycle. It is small and solid, with deep maroon paint and solid black tires worn treadless and as soft as suede. The ridged steps on the back – to stand on with one foot while you push – are bare of paint, and the small coasting bars on either side of the front tire are losing their chrome. The plate on the front, which bears the name of the manufacturer, is worn illegible.

Why do I keep it? Because it was a gift from my grandmother and grandfather, on the occasion of their last visit to Calgary when I was 5 years old. Grandpa lived another 20 years, and Nana is still going strong at the age of 93, but they never came to Calgary again, and the tricycle is the only gift they ever bought me. I still get a cheque from Nana every Christmas, but cheques don’t make memories.

Objects hold memories, and their value increases proportionally, perhaps even geometrically, to the age of the memory and the dearness of the person it invokes. Age does make one more nostalgic – even those of us who spit on sentimentality, and who think “?heartwarming’ is a four-letter word.

Memories make us hold onto the strangest things – things no one else would even consider. Like the tricycle of a 33 year-old woman who does not want children, or the piece of packing tape folded over a tuft of cat hair.

About the latter: My beloved cat, Max, caught his tail in my tape gun three days before I had to have him put down at the age of 14. I cut a chunk of his fur to remove the tape, and found it a few days after he died. I keep it tucked under the small black urn that contains his ashes. It reminds me of his colour and his soft warmth.

I also keep a Sears’ catalogue from early this year. The cover shows a white zippered sweater that I like, but do not love. My mother was dying when the catalogue came out in January, and did not want me to know how ill she was. So, when I would talk to her on the phone, she would talk about things she would do in the future. She wanted to buy me that sweater for my birthday in July, because she knew I liked sweaters and was sure I’d love that one. I did not have the catalogue, but she asked me to pick one up. I forgot, and she kept asking, so finally I did. She continued to talk about my birthday, right up until the end, and when the day came – 1 month after mom died, I wanted that sweater most of all, but not to have the sweater, of course. Instead, I have saved the catalogue.

Isn’t it strange that the things we keep around us are often so insignificant in material terms? People in movies and soap operas always cling to sentimental objects of great value – like a grandmother’s diamond ring, a jeweled pin that has been passed through the generations, or a priceless piece of art.

In reality, the things that invoke our memories are rarely treasures in the conventional sense. I recall a line in the movie Singles, when a man proposes to his pregnant girlfriend while they eat chili-dogs in the park: “Please, don’t make me remember this chili dog for the rest of my life!”

These things happen: who knows who might have an old chili-dog wrapper tucked away in a drawer. I wonder, sometimes, what kinds of objects other people hold on to, and if they are as strange and varied as mine. The one thing I know is that when you are in someone’s home, you can never predict which items they hold most dear. It might be the fine porcelain vase on the mantel, or the tattered receipt being used as a bookmark in an old almanac. Anything can be precious.

I say this in reminder to those who will look at my basement and ask why I keep all this junk. We all have our junk – and we all have our treasures. 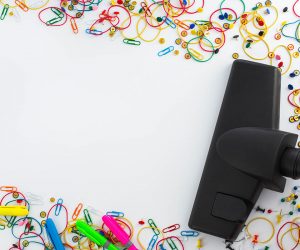 Clearing the Clutter—Making Space for Creativity