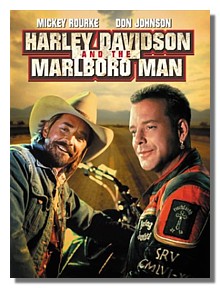 “He ain’t no cowboy – more like a pretty boy”, the tough Native American in the bar cracks to “Marlboro Man.” So goes poor Don Johnson’s life”?resigned to have to club all the men in the face or put up with character descriptions that are anything but masculine. Don’s TV career was inevitably a success. Two great cop characters in separate shows (Miami Vice and Nash Bridges) were projects that caved only after six successful seasons. He succeeds in TV every time! But film? Oh dear. Even his most clever films somehow don’t make box office – like this film.

I knew I was going to argue again with someone’s lame description of this film playing on UPN. They described it as a “generic buddy movie about drifters who mastermind a bank heist to save a friend’s bar.” They don’t rob a bank. They rob an armored car and instead of money find a sophisticated uncut drug they don’t want to peddle. They still want to save their buddy’s bar so they decide to hold the drug in exchange for the lease to the bar. The nasty bank wants to tear it down and turn into a skyscraper. The new “rent” is 2.5 million bucks! GAG!

I liked the fun touches and the clever dialogue thrown into this otherwise tough-guy film. Characters are in clever locations, like a bar with an airplane crashed through the roof and an office in a tower. (Watch for the “shoot out”).

Don has clever lines that shoot out faster than his gun.

Mickey Rourke’s character asks him, ” How’s it feel to be old?”

“The older the bull”?the stiffer the horn,” Don answers.

Don’s character has cowboy boots almost as old as he is— they’re in hilariously bad condition. He repeatedly repairs them with duct tape:much to Harley (Mickey Rourke)’s annoyance. Finally, Don reveals to his old pal that they are his one and only gift from his father.

There are clever touches added throughout, but like an old Pink Panther movie you have to listen carefully to catch all of the fast dialogue.

During the robbery, the driver has his gun belt shot off as well as something else (I missed it”?sorry) by Marlboro Man, Don. He quips,

“You’re about the best shot I’ve seen! Where’d you learn to do that?”

Don’s girlfriend, Virginia, played by Chelsea Field mopes and is angry that Don’s not in her life more often and then gratuitously sells out for a marriage to a cop who just made lieutenant. Of course the cop is unseen and all we know is he treats her like #$*&*! Sigh: nothing creative there.

Two women are a waste of time and a real drag on this film. An early work for Vanessa Williams has her playing a singing bimbo, Lulu. She spouts a ridiculous line to her ridiculous boyfriend about “us having babies some day” and strolls off with him. The line doesn’t fit and seems thrown in! I felt like I was watching a hastily added character:not fleshed out:all glam and about as clever as a 1960s walking bust job!

The second female waste of time is TV’s Relic Hunter star Tia Carrere in an early role. She is stunning eye candy, but I couldn’t tell you one line she had or one purpose to her role. Poor choices on behalf of the director, producer and writer!

Expect to spend about two hours watching this uneven but still fun film. Watch it because there’s a young “?n’ handsome Don, and Mickey if he’s your style, a great set of unusual locations, and some clever dialogue. This 1991 film is worth a giggle:and again :don’t choke on your popcorn!