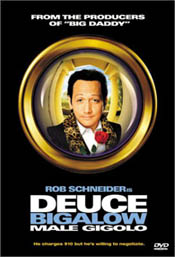 If you haven’t seen this Rob Schneider film you’ve missed some of his most hilarious antics. UPN TV reviewer Mark S. Allen dubbed it “the funniest movie of the season!” Those of you who are long-time Saturday Night Live fans will know Rob well : that leaves me out. I only know that this guy is funny and diverse and probably my favorite comic from the SNL bunch.

Rob plays a fish tank maintenance man who botches caring for a man’s aquarium while he’s away. By chance he finds this pampered client, Antoine Laconte (played brilliantly by Oded Fehr, most memorable as the sexy man of the desert in The Mummy) is a “man-whore.” You just can’t miss this sexy suave man saying “here fishy fishy” to his favorite pet, or the great rear shot at the airport which showcases his assets! Laconte makes incredible money doing what every guy dreams of — having sex! When Rob accidentally, and hilariously, breaks Antoine’s fish tank, (worth the rental price right there) he has to find a way to earn back the money to replace the expensive tank and its hard-to-find fish!

Rob pulls off this film about a male prostitute — excuse me, “man-whore,” as he keeps correcting everyone — so well. He meets up with the most amazing clients: there’s a woman who has a dreadful case of Tourette’s Syndrome. He picks her up and she starts yelling insults, cussing and cursing at unexpected moments. Sauve Rob simply rolls up the window and turns up the radio. She’s grateful he doesn’t just dump her on the sidewalk. There is an enormous black “woman”, the Jabba Lady, (played by Big Boy) who wants him in the lustiest way, who Rob starts working out with, and a tall woman who loves having her enormous feet rubbed! Also hilarious is the narcoleptic who is constantly keeling over deeply asleep. He gets her a protective helmet and she too is so grateful. Over time he finds the beauty in every client, and they adore him for it.

Detective Chuck Fowler (played by William Forsythe) roams around in between all these jokes trying to be the toughest Dragnet-style cop on the planet but mostly reveals his extreme insecurities, most of them sexual.

Bigalow’s “jobs” are handled by his man-pimp (naturally!) played by Eddie Griffin.

There is a thin line between bad taste and nonsense but by and large this film teeters on that line well. It may be uncomfortable to watch if you happen to suffer from any of these problems, but let’s face it, most of us are probably somewhere in the imperfect category! Rob’s a delight as a guy who just wants to avoid getting his face wiped all over the ground by a client missing his favorite fishy. Oded is so memorable my husband and I can’t pass a fish tank without quoting the goofball line to the fish!

This film is not to everyone’s taste, but it is mostly tasteful and funny. Some of Rob’s work is better than others and this is worth a good laugh — as a matter of fact I think I’ll put it in this weekend and have a good giggle.