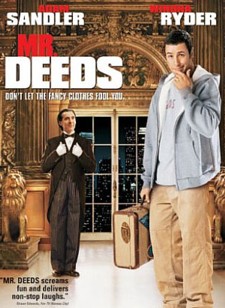 If you’re an Adam Sandler fan, the review I’m about to give won’t matter to you – you’ll brush it off. If you’re a Jimmy Stewart fan – I’m hoping you need to go wash your hair when this film is playing!

The local movie channels are playing the latest “remake” of Mr. Deeds Goes To Town. Frank Capra won his second Oscar for the original film with Jimmy Stewart playing a wholesome man who was honest and had common sense smarts.

In this version, the general plot line has been kept. Longfellow Deeds is a distant relative of a wealthy man whose fortune he inherits. These days I guess the original 20 million dollars wasn’t enough to make anyone gasp so they booted it up to 40 billion dollars. In the original, Jean Arthur played a reporter who tried to find out what made Longfellow tick. In the remake, Adam Sandler is Longfellow and Winona Ryder is Babe Bennett, a reporter who takes on the Jean Arthur role. Similarities are pretty much over.

The characters, and writing are badly done. For example, in a scene where a New York restaurant is being trashed by “society folk”, a small town kid who delivers pizza for a goofy buddy calmly says, “:such as yourself,” in his natural dialogue. The general idea is that the guy is simplistic. Fine. In another scene with his new butler and servants he gets them to holler in his museum size hallway to hear the echo. It didn’t fit with the stuff in the restaurant.

Winona is an annoying choice for the reporter. I’m sure she’s a favorite to many for her beauty, but I didn’t think she pulled off the role terribly well. She has an incredibly soft voice and rather blank, unexpressive face a lot of the time. Like Farrah Fawcett in her early years, Winona has a hard time convincing me she’s tough.

The Production Company, Happy Madison #2, also made Deuce Bigalow: Male Gigolo and Big Daddy. Sandler was the Executive Producer on these projects (which means he got the money for them). He also did the same for Mr. Deeds.

There are several fun cameos in the film. Steve Buscemi, a favorite actor of mine, is almost unrecognizable as Crazy Eyes. He gets the name from a pair of ridiculous eyes he has, and apparently the character is legally blind! John McEnroe, tennis player, is in a couple of scenes trying to be an actor. I won’t use the old line about his holding onto his day job:but he isn’t very natural in front of a camera! Then again his lines were silly and he suddenly has the leaping powers of a fighter from Crouching Tiger Hidden Dragon in another scene. I’m lost! It might look cute on screen but it made no sense!

The film made a lot of points about honesty and truth in the world around us. It got points for showing us the value of true friendships, which is something that Adam Sandler is apparently known for in real life.

I only wish I could say that this film is as much of a classic as the original. If it means anything, I have seen the trailers for the new film, Anger Management with Sandler and Jack Nicholson. It looks like a first class hoot! I’m also a serious fan of Deuce Bigalow and The Animal.

I’m not trashing Adam’s work; he’s a really talented guy. I’m just not a fan of this film. I thought a lot more thought could have gone into the writing and logic as well as a better female lead!