Articles
The Voice
In Conversation With . . . Doctor Sparkles

Doctor Sparkles is a ukulele-strumming San Francisco singer-songwriter whose songs are written in swing, cabaret, blues, klezmer, and other noble musical traditions.

His latest CD, Monkey Swing, Monkey Doo was self-produced (see Voice review here). He is now working on his next album, Scary Country.

In his own words:

The li?l fella that would become Doctor Sparkles was raised in a rather musical home in the idyllic town of Los Gatos, California. His stepfather repaired musical instruments out of the garage and conducted a 17-piece big band out of the back room. His mother sang and played in the band and taught voice and banjo lessons out of the house. Strange and exotic instruments such as double bell euphoniums and sitars hung from the walls.

His parents were also active in the South San Francisco Bay Area folk music scene throughout the 1970s and 1980s, regularly performing at folk music gatherings and the occasional nude beach. Until he discovered his parents? Beatles albums at age 16, he tended to avoid contemporary music, much preferring classical orchestral recordings.

His first music lessons were on the ukulele, but he toyed with all sorts of instruments. He studied the trombone throughout his teens, playing in the home big band for several years, but switched his focus to the guitar at age 17 because he wished to be a singer-songwriter.

To the extent that I am centred and present to the God-in-my-innermost-being, I am by definition ?Light-hearted? and haven’t the slightest use for gravity.

In fact, I consider seriousness a form of suffering in that its subject eclipses the Love residing in the heart, and if Love could be described as my religion, then being serious about anything amounts to worshipping a false idol. 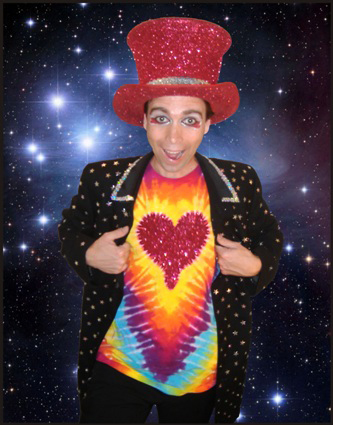 While I often suffer from such idolatry, I find that art, and particularly songwriting, helps me to put those false idols back into their proper place and perspective, whether that be by making light of my egoic self in silliness or by treating such ?serious subjects? with a ridiculous sense of whimsy. To the extent that I am successful, my art becomes transformative, at least to me. And I like to think that my demonstration can be healing to others as well. I am a doctor, after all.

This healing process requires the conscious cultivation of creativity. Any artistic expression is part reaction and part creation. Most of us favour reactivity both in our art and our daily lives, reacting as we have been conditioned to react, forgetting that each of us creates personal experience.

My approach is to consciously reconcile the two, to target all those ?serious subjects? that distract me from whom I really am, that incite me to react in fear or anger or sorrow, and blast them out of my consciousness with creativity?outrageous creativity if necessary?to leave Me Light-hearted.

Just as Creation manifests from No-thing (?The Void?), creativity is most easily cultivated from unscheduled time and uncluttered space. Ironically, I tend to be most artistically prolific when I have to make the time and space in an otherwise busy life, and I suppose That’s how my reactivity (to such business) mobilizes and influences my art.

I’ve contemplated deeply upon most of the world’s major religions, and a few lesser-known ones, and I’ve come to the conclusion that religions are, for most, boxes believed to be elevators. While their rituals, teachings and moral codes can help prepare one for the experience of higher consciousness, they no more serve the spiritual aspirant than Dumbo’s magic feather enabled the elephant to fly.

I enjoy measuring time in terms of the Mayan Sacred Calendar, and my ideals of self-enquiry, love, and non-attachment, along with the metaphysical rationale in their keeping, tend to be most in alignment with Christian and Hindu mysticism, but please don’t hold me to that. God is the ultimate sacred cow.

Politics are collectively a game of deception in which I hold zero confidence, yet I am affected by what I see happening in their wake, most especially in these United States. The so-called Democratic and Republican parties have become two heads on the same push-me-pull-you big governmental monstrosity, one head appealing to socialist sympathies, the other to fascist interests.

Its body is becoming a police state systematically squashing the individual sovereignty and personal liberty of the people its politicians claim to represent while its militaristic claws are extending around the globe to subdue other peoples in the name of ?freedom.?

What I Do For Fun

Landmarks on My Personal Journey

Looney Tunes and Merrie Melodies; the original Star Wars Trilogy (episodes IV-VI); the art of M.C. Escher; Monty Python’s Flying Circus TV series and films; The Lord of the Rings by J.R.R. Tolkien; The Way of the Shaman by Michael Harner; The Yoga Aphorisms of Patanjali and the Yoga Vasistha; the psychic readings of Edgar Cayce, especially A Search for God; the writings of Paramhansa Yogananda, esp. Autobiography of a Yogi; Jose Arguelles’s writings on the Mayan Sacred Calendar and related study; Science and Sanity by Alfred Korzybski; and the writings of Charles Vincent Davis, especially The Eight-fold Declarations of the Living-Christ.