Articles
The Voice
In Conversation With . . . Chris Rehage

Chris Rehage is a German university student who began to walk across China in 2007. After completing a third of his journey he decided to return home and finish his degree. Rehage chronicled this walk, and his reasons for ending it, in his website The Longest Way, which holds a fascinating array of incredible photos from the trek. Plugging Chris’s name into YouTube will bring up a host of mesmerizing videos from the journey (be sure to check out the dances he performs every thousand kilometres).

I grew up in Bad Nenndorf, a small town in the north of Germany. There are 10 thousand inhabitants, and everybody kind of knows what the others are doing. I have a little sister and a little brother. A cat and a dog are there to brighten up our days.

I have to admit, I like Charles Bukowski’s prose. Not so much the profanity and the drinking as his use of language and his humorous outlook on life. Besides that, there is a German journalist who died in the ?80s, Michael Holzach. He published a book that recounts his walk through Germany without a penny to his name. Very interesting.

How Walking Changed Me

I know now that I must get my priorities straight. Very important. 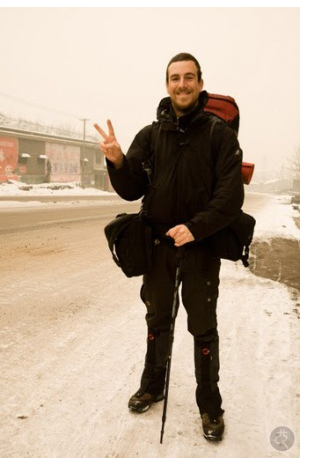 I’m Roman Catholic. I like going to church when there is no service going on, just to sit there with the big guy.

I prepared for a year. Basically, It’s all about getting as smart as possible regarding the places and the people on the way. I talked to German embassies all over the world, stumbled through map archives in several libraries, and read books, books, and more books. Then I got equipped. Then I walked.

I had to do this for some reason. Still wondering what exactly that reason was.

I met him after roughly 3,000 kilometres on the road, an old Chinese guy pulling a huge wooden cart down the desert road. I asked him how long he’d been on the road. ?Since 1982,? he said. ?Chris, you make the rules, you are free to change them,? he said to me. ?Be sure of what it is you really want!? We stay in touch. He owns a cell phone and loves to send out text messages.

There were two moments of great happiness. The first one was next to a small pond in a desert village in Western China. I was surrounded by a horde of young kids who were bombarding me with questions. It was all laughter and hellos, and they made me a ring of twigs and flowers and put it in my hair. I remember thinking, Damn, I want to have a family!

The second one involved a total absence of people. I had climbed over a fence in the mountains and entered an untouched valley full of blossoming peach trees. I took off all my clothes, lay down, and let the birds sing me a song.

Uncle Shen and Huihui were two guys who helped me get myself straightened out during the last step of my trip. So many kind faces on the roadside. So many kids and old people. I feel deeply touched by all the warmth that they gave me.

When the walk ended I felt I had lost something. I didn’t know exactly what it was, but I was sure that I had to try to find something new. 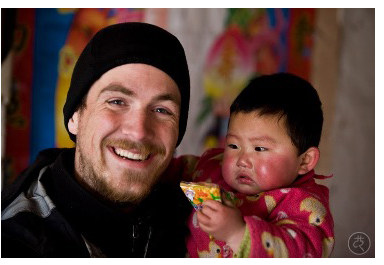