Articles
The Voice
In Conversation With . . . Gescha, Part II 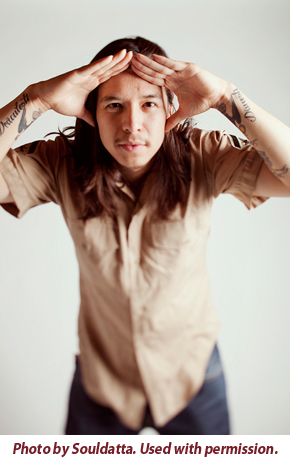 Gescha is a young Canadian hip hop artist who has shared the stage with Tech9, Classified, and Sweatshop Union, among others. His single ?Love Pirates? made #8 on the Canadian singles sales charts the week it debuted. After years of struggling with a self-destructive lifestyle, Gescha now mentors youth in an attempt to prevent others from repeating his mistakes. His new album, Crayon Politics, arose out of his desire to channel his personal pain in a positive way through creative expression.

Read Part I of his interview here.

The mentoring experience really came along at a time where I had cleaned up my life and was looking for some form of redemption for the wrongs I’d committed. I was sick of poisoning the community and it was the first place where I knew how to give back. So I started working with kids who were beginning to walk the same path I had. I viewed myself as a leader and believed many of the youth that I was working with could also become leaders in the community if they felt empowered to do so. This is really what motivated my work at the time. It just so happens that I was very passionate about what I was doing, and now building community and working on social justice issues through media is a big part of what I do.

My social conscience plays a large role in the music I create, although It’s not a driving force. I make music about life and throughout that process I weave in political and social justice issues. I feel as though music must speak to the heart first and relate to people on a personal level, and once That’s been accomplished you can spark the fires of passion on world and community issues. That’s why I believe It’s important that an album be balanced between these two things. If you only make political music you just preach to the choir; you need to connect with people first and then use that connection to get important issues across and raise awareness.

If being creative is important to me and my life I will create the scenario and [circumstances] . . . which I need to achieve this goal. So for me solitude [and] time to myself [are] important. It’s in this context that I’m able to create and be free with my thoughts and expressions. Time without solitude is where my mind is attaining information, processing and storing that information, and then reprocessing the collection of new information and how it relates to old information. My creations are a mere exhale of that insanity, and That’s why I need my art to function.

Pistols in the Air

Strangest story I have was while I was on tour with Redcloud. I was offstage watching Redcloud do his freestyle routine where he asks people in the crowd to pull items out of their pockets and hold them in the air. He then incorporates whatever he sees into the freestyle. Suddenly this dude pulls a nine- millimetre pistol out and throws it in the air while he’s wearing a bulletproof vest as if this is no big deal? just a normal day at the office?and then Redcloud drops this line: ?Yo, this native cat in the crowd, he’s trying to murder me, so I grab his gun and I’mma give it to security? and simultaneously snatches the gun out of this dude’s hand and hands it to the bouncer at the club. This was followed by some crazy commotion and the dude trying to say his loaded gun was fake. Classic case of using the brain.

2012 is going to be a busy year. I have a new record that should be dropping at the end of the year and will be launching a new group called ?Lost Kings.? we’ll have an EP ready and released for the summer as well as some new music videos.

I’m also currently filming a documentary on race relations in Saskatchewan, which should be released summer of 2013. 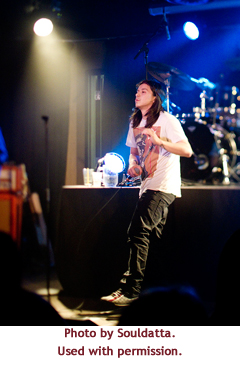 In Conversation With . . . Gescha, Part I

NEW COLUMN – From Where I Sit – Stand Proud