There’s a fundamental rule that every student and writer should know: Thou shalt not plagiarize. In plain terms, don’t pretend that somebody else’s work is your own. But what if the words You’re copying are your own, but you’ve already used them somewhere else before? It’s a problem that hit The New Yorker recently?and It’s one that doesn’t have an easy answer.

The commotion started June 19 in a blog post about Jonah Lehrer, a writer with a successful career and a brand new staff gig at The New Yorker. The blog post came from Jim Romenesko, a media critic, who noted that Lehrer was recycling content he had previously sold to publications like the Wall Street Journal.

A little digging by Romenesko and others revealed that it wasn’t the first time Lehrer had resold his work. This Poynter article includes links to 13 other occasions on which Lehrer recycled his words, major ideas, or both.

There are obvious issues with this, mainly because publications are usually paying for, and entitled to get, original content. When magazines and newspapers negotiate payment for original material but get content That’s already been published, It’s not only a moral issue but a legal one.

But there’s also an enormous grey area here in the moral obligation Lehrer has to his readers. That same Poynter article notes that, when readers approach Lehrer’s work, there is an ?unspoken contract: You devote some of your precious time, he’ll take you and a few thousand others to a new intellectual space.? One can assume, then, that this premise holds true for all writers, not just Lehrer. And if That’s the case, why doesn’t it apply to other fields where we pay to be enlightened or entertained?

Take Jerry Seinfeld, for example, or Jeff Foxworthy. Both these comedians have worked stand-up circuits for decades. They’ve sold out live shows, put that same material on CDs and DVDs, and had various TV specials and sitcoms. Yet there’s no guarantee that if you shell out a substantial amount of money for a ticket, You’re going to hear new material. More often than not, those live shows and CDs comprise reprocessed ideas and lines you’ve heard before. There might be new material sprinkled in with them or there might not be, but there’s certainly no outcry about it.

And if you want to keep the debate to the intellectual sphere, does every single one of Stephen Hawking’s books and lectures consist of entirely new content, without a single passage or idea reused? It’s also not unusual to find bloggers compiling several years? worth of their most popular posts and selling them in book form. It’s a growing trend, and one That’s seeing a lot of people gladly pay for recycled content.

One way of looking at it is to ask whether this is comparable to buying a new release by your favourite author and finding out that half the book consists of passages used in her other books. One might argue that, since books always carry new titles (except revised editions, of course), we can safely assume that they contain all-new material. But comedy and lecture tours are often billed under unique names as well, and much of the material, either ideas or specific words, has been used before.

The only time an audience can expect completely fresh material is when a lecture or comedic performance is advertised as ?All-new material!? Conversely, we never see those words on the front of a newspaper of magazine. There does, indeed, seem to be an assumption that the written word will always be original, whereas the opposite rule applies to spoken content?even when we’re paying hefty ticket prices, far more than we’d spend on a magazine.

Now there’s an idea for energetic authors: take their article content and turn it into a stand-up tour. I can practically see the promotional line now: ?You Know You’re a Redneck Physicist When . . .? 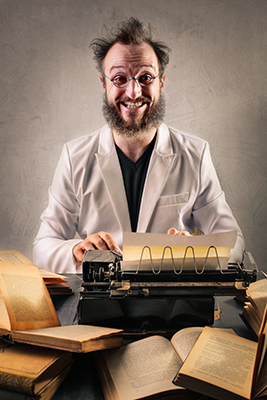 In Praise of Amateur Writing