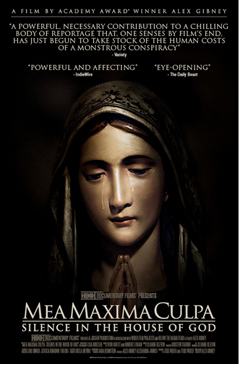 Film: Mea Maxima Culpa: Silence in the House of God

?If anyone causes one of these little ones?those who believe in me?to stumble, it would be better for them to have a large millstone hung around their neck and to be drowned in the depths of the sea. Woe to the world because of the things that cause people to stumble! Such things must come, but woe to the person through whom they come!?

In the End It’s the Silent Who Abolish Silence

No, It’s not your typical feel-good summer entertainment. But in spite of reams of sickening discoveries and shocking revelations, you do come away from it with a sense of hope.

Then you find out the Vatican knew about it all along and hushed it up and continued to put offending priests in positions of trust.

You think perhaps It’s a modern epidemic that the Vatican just wasn’t ready for, but no?there are records of the Vatican being made aware of pedophilia within the church as early as 400 A.D. Almost two millennia and they hadn’t budged an inch toward dealing with the problem until, surprise, surprise, ordinary Catholics joined with secular elements in society to call them to account.

Wrenching Open the Can of Worms

In the 1960s, pedophilia was old news. But publicly condemning it just didn’t happen until a group of young men whodunnits’d attended St. John’s School for the Deaf in Milwaukee, Wisconsin, decided that for the protection of students, Father Lawrence Murphy needed to be removed from his position as head of the school.

Many of Father Murphy’s abuse victims hadn’t been able to tell their parents that the priest had been molesting them because their parents couldn’t understand American Sign Language, but some nonetheless found interpreters to help them. Some parents were angry at their children for suggesting a Roman Catholic priest could do such a thing, but others believed their children and took steps to have Father Murphy removed. All to no avail; other priests who were told of the abuse and reported it were quickly silenced.

But Terry Kohut, Gary Smith, Pat Kuehn, Bob Bolger, and other former students had been sparked by a larger cultural climate in which authority was being challenged and the marginalized were demanding their rights. They continued their campaign. At events put on at the school, they would place wanted posters with Father Murphy’s face on the windshields of those being importuned for donations for the school. In the end they pushed their lawsuits all the way to the Vatican, and a very reluctant Vatican was finally held accountable.

you’d think a film like this would come off as being anti-Catholic, but It’s not. What the film does condemn are power structures, hierarchies, and systems of privilege that allow leaders to indulge in and tolerate the worst forms of hypocrisy imaginable. (Those of us brought up in the Protestant church have no right to be smug. Our lack of central authority makes us harder to sue, but no less guilty of crimes and cover-ups.)

In the end, if the church is anything, It’s a body of true believers. Any system that aims to control, exploit, and victimize this body is simply an imposter. We can only hope and pray that such imposters? days are numbered.

There’s a moving scene in which Bob Bolger goes to the woodland retreat of the now retired Father Murphy and confronts him in his own yard. While Father Murphy dismisses him and walks into his house, Bob signs frantically, struggling to express his rage in his limited speech, insisting, again and again: ?No! You go to prison! Now!?

He could just as well have been addressing the system that has ripped the innocence from the hearts of millions of children for centuries, winning their trust only to betray it, using them as sexual objects while filling them with an unnatural sense of shame regarding normal human sexuality.

Somehow even more frightening than the sexual predators are the ?good? people who protected and enabled the predators. Sexual exploitation is not about normal sexual desires–It’s about exercising an unlawful power. The silencing of victims and their families served only one purpose: to help church authorities hold onto the massive degree of control they’d mustered in the name of the Master they’d refused to obey.

Mea Maxima Culpa manifests five of the Mindful Bard’s criteria for films well worth seeing: 1) it poses and admirably responds to questions that have a direct bearing on my view of existence; 2) it inspires an awareness of the sanctity of creation; 3) it displays an engagement with and compassionate response to suffering; 4) it gives me tools of kindness, enabling me to respond with compassion and efficacy to the suffering around me; and 5) it renews my enthusiasm for positive social action.