If you’ve had a prescription filled lately, you know that every bottle of pills now comes with a tiny encyclopedia. There are instructions on how to take your medication, warnings about interactions, and details about side effects. But what you might not know is that your tap water should probably come with the same warnings. It’s a random cocktail of excreted drugs?and it could be affecting your health.

It’s no surprise that drugs (prescription and otherwise) still find their way into our water supply. Although many pharmacies will dispose of unused or expired drugs for free, a lot of people take the lazy way out and simply dump them down the toilet.

A bigger culprit, though, is the unavoidable fact that what goes in must come out. Whether they’re painkillers, beta-blockers, or antidepressants, the millions of prescriptions we ingest every day eventually come out the other end. And get flushed straight into our water supply.

How bad is the problem? As the CBC notes, officials from Environment Canada have reported that, as of 2014, “more than 165 individual pharmaceuticals and personal care products have been identified in water samples.” That includes things like hormones, chemotherapy drugs, and diabetes treatments.

Though It’s hard to know the precise effect on humans, one study found that so many hormones were ending up in the St. Lawrence River near Montreal that fish were being affected. A CBC article from 2008 reported that “concentrations of estrogen as high as 90 times the normal rate” were causing male fish to develop ovaries.

The good news is that, for humans, the pharmaceuticals in our drinking water are in such low doses that you’d have to drink hundreds of gallons a day to feel noticeable effects. Still, that may be offset by the cumulative impact on the body over years?and the unpredictable combination of drugs in the average drink of tap water. There’s simply no way to tell what’s in your water bottle or coffee cup without testing it, and That’s not being done.

In fact, although the problem was first highlighted more than 10 years ago, very few water treatment plants make any attempt to filter out pharmaceuticals. It’s not that they’re falling down on the job. In Canada, as the same CBC article notes, there are simply “no national drinking water standards for pharmaceuticals.” Even if there were, existing water treatments wouldn’t do the trick. Old standbys like chlorine, for example, can remove some compounds but have almost no effect on others.

So does this mean you should stop drinking tap water? You could, but bottled water isn’t necessarily better. Both tap and bottled water must meet certain standards for cleanliness, but that doesn’t mean either one is free of pharmaceuticals. There’s also the fact that the plastic used in bottles often ends up polluting your water supply anyway?often in the form of minute particles that break down in oceans and rivers.

Besides, processed juice and many other drinks (including pop) are made with water, so avoiding your kitchen tap won’t help as much as you might think.

The answer? Science needs to catch up with itself. Researchers have found ways to relieve or cure a lot of what ails us. Now they need to come up with another solution: what to do when all those remedies make their way into our drinking water. In the meantime, let’s hope there’s nothing too alarming on tap. 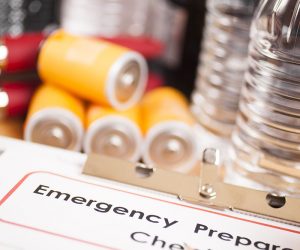