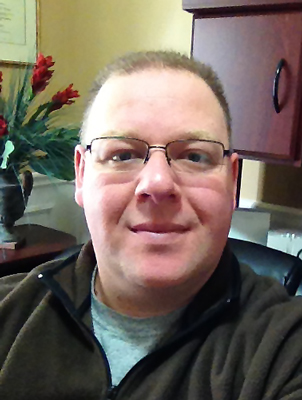 Gonzo Moreno is an AU student living in Ottawa, Ontario. He’s a Manager of Business Development for LightSquared, a satellite communications company, and has worked there for the past 13 years. Gonzo is in the Business Administration program at AU and began his final course in March.

Gonzo was recently interviewed by The Voice Magazine about school, saxophones, and satellites.

Describe the path that led you to AU.
After I graduated from Algonquin College in Ottawa with a 3-year Business degree, I started working. Then I found out that Algonquin has a relationship with Athabasca University, and I could get credit for the equivalent of 2 years at AU.

What do you do like to do when You’re not studying or working?
Well, I’ve got two kids, ages six and eight, so That’s about it!

What happens after you finish your education?
I don’t know. I’ve been in my job for 13 years and I’ll probably continue. I really just wanted to get a university degree. I’m proud of my college degree, but these days the business world is fixated on university degrees. Having that extra education might give me a leg up somewhere down the road.

Who in your life had the greatest influence on your desire to learn?
That would probably be my dad, and his dad?my grandfather?too. My grandfather was very intelligent?he was a university math professor?and he won a scholarship to Columbia University [an ivy league university located in New York State] around 1935. My dad is quite intelligent, as well; he is an electrical engineer and is still working in that profession. Years ago he came to Canada from Chile?in February?with no English or French skills; he got a job and made a life. From them I learned that learning is an ongoing process. My mom, as well, was an influence. She was a university professor of social work in Chile but that wasn’t recognized when they came to Canada. Both my parents had to work hard to get their professional titles/designations recognized in Canada by the respective institutions. All of this was made more difficult as they were learning English and French. They both enjoyed very successful professional careers. My mother was the Executive Director of the Canadian Association of Social workers and my father is the General Manager of the FCSA, the highest position in the organization.

What famous person, past or present, would you like to have lunch with, and why?
How about Charlie Parker, the jazz saxophonist. I’ve played saxophone since high school. I play in a swing/jazz/dance band right now, if you can believe it. Charlie Parker was a fantastic musician. He had a great work ethic and a great deal to advance jazz music. I think it would be cool to have a chat with him.

Describe your experience with online learning so far. What do you like? Dislike?
I love the flexibility. With young kids, It’s great to be able to do courses at home on my schedule. I think That’s the best part of AU: it lets parents continue their education with minimal disruption in family life. And the resources and support you get from AU are fantastic. It’s great that you can make a phone call and get help with your program. One of the drawbacks is that there’s no face-to-face contact. We used to have a coffee group here in Ottawa but that seems to have fizzled out. There’s also lack of face-to-face with tutors, and the policy of 2-day turnaround on inquiries means sometimes You’re waiting a long time for the answer to a quick question.

Another drawback is on the technical side: For some reason I was unable to log into the Athabasca site from my home computer. And when I was able to log in it was infuriatingly slow and some pages would not even load. While my pc was a few years old and running Windows 95, many people still have and use Windows 95 and it can be quite frustrating when things don’t work.

Was there ever a point when you wavered about your education?
Not really. To be honest, I’ve been doing this for about 9 years, so I’m a bit of an eternal student. I’m a bit like the turtle with my education: slow and steady. I’m fortunate that my employer pays for my courses, as long as I pass, so I don’t have any financial worries surrounding my education.

What’s your most memorable AU course so far, and why?
I guess it would be the Spanish courses I took. I was four when my family moved to Canada from Chile, so as an adult I couldn’t speak Spanish very well. The course coordinator was really good and we had some great conversations. In addition to language, the courses covered different cultures from Spanish-speaking countries around the world. The courses allowed me to improve my written Spanish, which has really helped out at work. I’m now the go-to guy when we need to communicate with our customers in Mexico.

Describe the proudest moment of your life.
That would be a tie between when I got married, and when my kids were born.

If you were the new president of AU, what would be your first project?
It would be to make sure that online students, who are the majority of AU’s students, are well taken care of and feel like they’re part of the AU family. Just like a bricks and mortar university, students want to feel a sense of community.

If you could wake up tomorrow with a “superpower,” which one would you choose?
I’d like to be able to fly. I live in the west end of Ottawa, and I work in the east end, so flying would save me a lot of time.

If you were trapped on an island, what 3 things would you bring?
A satellite phone, obviously, and water purifying tablets. And I’d bring some bottles to send messages out in. These bottles could be full coming in, of course.

Describe one thing that distinguishes you from most other people.
Well, my name is Gonzalo, but I’ve been Gonzo since grade 7. It’s just a name that stuck and now hardly anybody knows my real name. Unlike the muppet Gonzo, though, who plays the trumpet, I play the saxophone.

What is the most valuable lesson you have learned in life?
It’s just to never give up. Even if you get frustrated, just keep going. Like Dory, the fish in the movie Finding Nemo, “just keep swimming.”

What do you think about e-texts?
This is the second time I’ve used an e-text. It’s okay, although I prefer a book I can hold. There are some drawbacks to e-text, but I like that It’s easily portable. I can take my tablet along to work with me, and I can access the e-text from any computer.

How do you find communications with your course tutors?
In general, It’s good. The two-day turnaround for questions is a bit frustrating, but understandable. Even with a regular university you sometimes wait that long.

Where has life taken you so far?
Chile, where I was born, and Guatemala, where my wife is from. My brother lives in Mexico and I’ve visited him and his wife there. And a previous job I had took me to the Philippines and South Korea, and also to California for five months.

What (non-AU) book are you reading now?
I’m reading “If on a winter’s night a traveler” by Italo Calvino. It was originally written in Italian, and It’s been translated into dozens of languages. I first attempted to read it in Spanish, but I found it challenging so I’m reading the English translation.