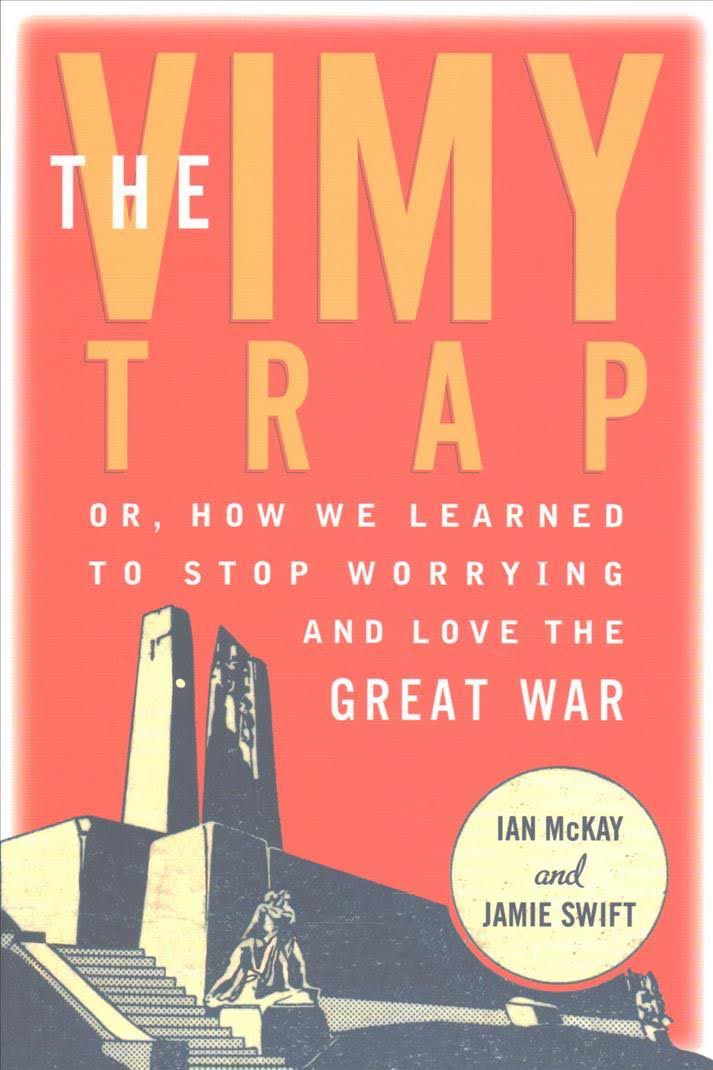 Book: The Vimy Trap or, How We Learned to Stop Worrying and Love the Great War
Authors: Ian McKay and Jamie Swift

The Battle of Vimy Ridge was part of the larger Battle of Arras in northern France during the First World War.  Between April 9th to 12th, 1917, four Canadian divisions wrested control of the ridge from the Germans, at a cost of 7,000 Canadians wounded and 3,598 killed.  The capture of Vimy Ridge is often presented as a turning point for the young Canadian nation, establishing its military prowess and marking its independence from Britain.

In The Vimy Trap or, How We Learned to Stop Worrying and Love the Great War, Canadian Historian Ian McKay and journalist Jamie Swift attempt to demythologize this Canadian legend.  The authors trace the representation of Vimy Ridge in the Canadian psyche over the last one-hundred years, from a single battle in a futile war to the myth of a nation building moment.

As the title indicates, the authors see the symbolism that we now associate with the Battle of Vimy Ridge to be a trap.  They view the mythology of Vimy (a perspective they call “Vimyism”) as dangerous, presenting a romanticised vision of combat that denies the realities of modern warfare.

Of course, the book’s subtitle alludes to Stanley Kubrick’s 1964 classic satirical film, Dr.  Strangelove or: How I Learned to Stop Worrying and Love the Bomb.  The movie’s plot ridicules the Cold War and the policy of mutually assured destruction.  In it, after an unbalanced general in the United States Airforce orders the bombing of the Soviet Union, the US futilely attempts to call off the mission.  In response, the Soviets set off a weapon that will destroy all life on earth.  McKay and Swift seem to be warning us that an unchecked militaristic perspective leads to disastrous consequences.

Throughout The Vimy Trap, McKay and Swift separate the First World War (the Great War as it was originally known) and the Battle of Vimy Ridge from the significance later imposed upon these events, and help the reader understand what the war meant to earlier generations of Canadians.  They examine contemporary reports, books written by the combatants, newspaper and magazine articles, as well as artistic works, and museums and monuments, to show us that few people during the war or immediately after saw Vimy as the symbol that it has since become.

McKay and Swift also challenge our modern notions about the Great War.  Though often justified as a war against tyranny, that was never true.  Our allies, the “Entente” included Czarist Russia, a country hardly interested in democratizing the world.  (One could say the same about Great Britain and France, each with a vast empire built upon the invasion, domination and exploitation of foreign nations).  It was clearly, as the authors quote historian J.L. Granatstein, “a battle of rival imperialisms” (p.  33).

Nevertheless, the book’s focus is on Canadian participation in the war and the many assumptions we now take for granted.  It was not, as we are now told, a war that united Canadians.  In fact, at the war’s outbreak most of the Canadians who enlisted were British born.  While at least initially these English-Canadians eagerly enlisted (and were convinced they would participate in a quick and easy victory), French-Canadians had little enthusiasm for war.  Amid protests against conscription four Quebecers were shot to death.  And rather than reminiscing about valour or glory, Canadians who fought in the Great War remembered its horrific carnage.  In its aftermath, instead of a nation revelling in gallantry and heroics, the authors portray an atmosphere of overwhelming revulsion at the destruction created by modern warfare.

Likewise, the book also confronts many of the accepted beliefs about Vimy Ridge, placing little strategic significance on the hard-fought victory.  The Germans certainly did not see it as a defeat, nor did it lead to the anticipated allied breakthrough that would have ended the trench stalemate in that region.  Furthermore, few Canadians at that time, according to McKay and Swift, believed that Vimy Ridge represented a nation building episode.  The authors assert that for the most part, this understanding would only be imposed upon the battle many decades later, in the 1980’s and 1990’s, with the mythology eventually making its way into popular books and educational materials.

For many readers, this book will challenge their perceptions of the battle at Vimy Ridge and the First World War, but it is meticulously researched, including extensive notes and further reading sections.  Short listed for the Writers’ Trust of Canada Shaughnessy Cohen Prize for Political Writing, The Vimy Trap would make an fascinating read for anyone interested in popular politics, cultural studies, Canadian history or the history of the First World War.