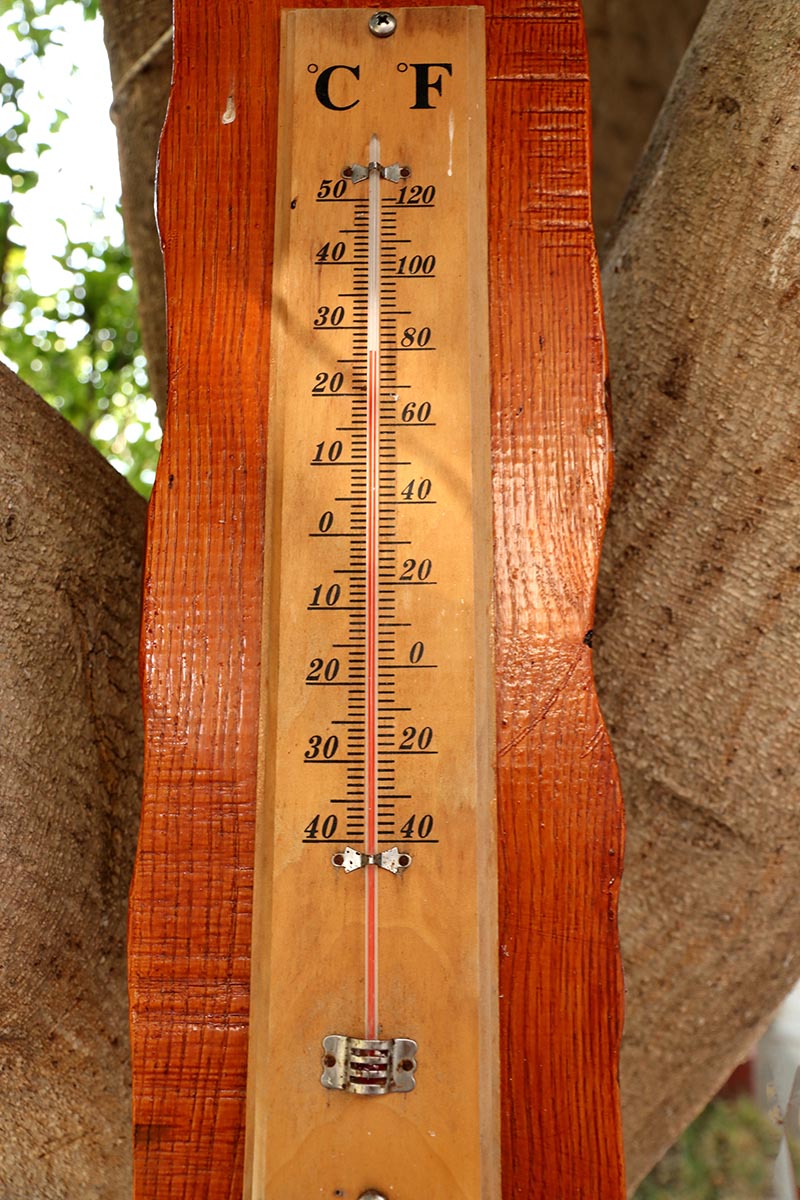 Nothing’s more banal, or adroit, depending upon its users, than a conversation about temperature.  But did you know that the gendered pronoun controversy can blow like an Arctic front into the temperature mix?  Consider the French term, il fait froid, normally translated as a way to say that it’s cold.  Literally the phrase reads that he makes cold.  Who is this he?  He can be an it or a he, the word has two implications (and, I’m told, some guys are more of a Pinocchio than a Real Boy).  However, when we speak, the he is me, the speaker.  So, then, wherefrom arises the temperature?  We don’t make it but it comes from the same noun as ourselves.

Baruch Spinoza would say that temperature comes from God-or-Nature but in truth the cold is also in the eye of the beholder (and whether said beholder is dressed to conditions).  To speak of the temperature is to personalize reality; numbers implore us to make them our own but, in the end, it’s our activity that makes the temperature feel like what it is (or what it is not).  As such, temperature is as personal as our AU education.  It’s up to us to be dressed for success with study habits that fit our temperament.

Kudos to every student who completes even a single AU course.  Remember, many folks claim to enjoy psychology, or perhaps mindfulness, but to actually read and annotate a whole textbook for a course and write a few big essays? That’s another matter.

Likewise, surviving a prairie wind or an alpine snowshoe expedition connotes a different sort of we have cold winters than does the mere fact that the thermometer outside of our heated abode dips into the nether regions.  As Canadian students we know that winter means business and we have to plan our study breaks accordingly.  Joyous though it be to run outside and jump into a snowbank, we don’t do so without awareness of the consequences.  Our clothes decide the overall joy of the feeling far more than the actual temperature and the same is true with our chosen method of study schedules, mnemonic devices, and essay editing.  (Sometimes a mental paper cutter has to give way to the white heat of a metaphoric acetylene torch, for instance).  True too is that if we choose to annoy ourselves with the wrong background music, our personal study nook may become as hellacious as a library doing double duty as a daycare.  Above all, at AU we must personalize our experience of reality and pack the proper emotional parka to ward off the winds of procrastination.  Okay, that was a clunker, but if we can’t note and accept our failings then how can we succeed?

Time is like temperature in that it can be the cause of excitement or trepidation.  Time seems to skip along faster while we scroll through social media but we know that the seconds are ticking and tocking at the same rate as when we wade through actual coursework.  It’s just, well, time flies when we’re having fun and/or wasting it.  And so, procrastination will happen and is as inevitable as the seasons.  And we need the proper rejuvenating study breaks to ward off what I call The Drift.  We have to face reality with clarity and honesty: AU is not going to be a sunny walk in the park with al fresco dining on easy A’s.  The freedom to make one’s own schedule is in fact a greater responsibility than we might ever have imagined.  Happily, good study skills can become as smooth and natural a process as pulling on our long johns and waffle shirt before going outside on a winter morning.

Facts Salted and Facts on Ice

As with natural aptitudes, think here of the concept of a gifted child, some realities are unavoidably true.  A thermometer never fibs as it stands nailed against a wall.  But the aspect of the wall, windy or north-facing, or sheltered and south-facing, makes all the difference.  Visiting the federal weather station in my town reveals that some temperatures are literally taken from within a hole in the ground, the better to reduce bias from wind.  In a vacuum temperature is true but, as with our studies, it’s our personal feelings that we must remember to include.

The very human reality that runs hot and cold is illustrated by the twists and turns of technologies for measuring temperature.  The line of progress from Fahrenheit to Celsius is not so cut and dried as one might imagine.  Fahrenheit was invented in 1724, and involved measurement based on a mixture of salt and ice.  Celsius, meanwhile, came along in 1742 and was based, as we know, on Zero the temperature at which water freezes.

Mercury in thermometers was Mr. Fahrenheit’s idea but thermoscopes, as they were once called, go way back:

“One of the first thermoscopes was developed by Italian inventor, Galileo Galilei in 1593.It used water as the liquid and glass bulbs inside an open tube.  The glass bulbs rose and fell with the changes in temperature.  In 1612, another Italian inventor, Santorio Santorio, used a numerical scale on the thermoscope but it was very rudimentary.  In 1654 the first sealed glass tube was developed by Ferdinand II, the Grand Duke of Tuscany.  It contained alcohol and had a numerical scale, but wasn’t very accurate.

The more modern thermometer was invented in 1709 by Daniel Fahrenheit.  It was an enclosed glass tube that had a numerical scale, called the Fahrenheit scale.  The early version of this thermometer contained alcohol and in 1714 Fahrenheit developed a mercury thermometer using the same scale” (https://jamaicahospital.org/newsletter/history-of-thermometers/).

Note that a warmer clime, Jamaica, provides this viewpoint.  It’s a place where temperature is not about hypothermia or frostbitten appendages and more about pediatric care and viral well-being.  In today’s cultural climate of plagues and hypochondria it’s not surprising that safer quick scanner thermometers are popular; the irony, though, is now that no child’s fever goes undetected kids seem sicker more often.

It’s a bit like checking the weather forecast the day before an outdoor event; if we expect inclement conditions, we are entering the fray with a pessimistic outlook.  And at AU the worst thing we can do is set out to fail a course or exam by failing to make a study plan.  If we must constantly check our progress we’re already in trouble.  So too with the psychology of exam anxiety and writer’s block; the best solution to both, in my opinion, is to cease with the predictions and engage with the task at hand.  You can always go back and erase later.  Plus, the fear factor never hurts.  Embrace it!  It wasn’t so long ago that fears about the deployment of a thermometer was cause enough for one’s symptoms to abate.  Motivation to get well, or at least play the part, was for good reason: for most of medical history thermometers were of the rectal variety.  “The first real medical thermometer was invented by Sir Thomas Allbut in 1867.  It was six inches long and took about five minutes to take a person’s temperature”.

For Colour to Return to Faces, Considering Creativity as one of Fahrenheit’s Graces

Most of us at AU grew up with Celsius and its logic of zero being the temperature at which water freezes.  But Fahrenheit did once hold sway.  Contemporary with the switch to Celsius was the arrival of the metric system to Canadian shores.  Some will recall Charlotte Diamond summarizing the glory of measurements with easier math: “I love to multiply by ten”, she sang.

Yet, Fahrenheit is not without its benefits.  One might argue that Fahrenheit allows more space for the expression of our creativity.  Fahrenheit allows for more precise details; there’s a vaster subjective difference between 66F and 72F as any room heats up, and it’s something arguably harder to quantify with Celsius’ lesser scale of possible temperatures between 19C and 22C.  Likewise, when the mercury dips toward zero in Celsius it’s not such as big deal as in Fahrenheit thus giving, perhaps, a different sense of the ontological state of being freezing.  Sub-Zero as a concept is more drastic in the Fahrenheit scale as it is when thinking about the gulf between positive and negative thoughts, feelings, and experiences.  Think of Elton John’s famous album Too Low For Zero.

At the other end of the index, when it’s 100F in Summer that sounds positively like the planet Mercury, whereas 38C is hot, but still within a two-digit range of reality.  So, for those who feel deeply and with much complexity, Fahrenheit might be the scale for them.  Or at least this argument I’ve just made can be cause for giggles.  In any case, pedagogically it’s to our benefit to look beyond simple binaries wherever we find them.

Crucially for our studies—and critical thinking more generally—to realize that external hard facts invoke social interpretations is ground zero for unlocking critical thinking and questioning underlying core beliefs.  And, as when we mature as thinkers and become more open-minded, we might see that temperature relates not just to what someone on TV says or how some gadget on the wall reads.

Our feelings matter in every equation, no matter how objectively the facts are presented.  Education is about making our learning our own that we may pronounce our unique view upon the world.  Creativity, after all, is about being a special enough snowflake that we can express ourselves without being reduced to caricature as a windbag.  Wind-chill suggests this metaphor nicely if we think of the nature of our local geographic region; some folks live with constant wind and the resultant drop in temperature is a fixture in their reality (if not their sheltered thermometer).  In fact, just as the personal is political, there’s a certain forging of ideology within the way temperature seems separate from contextual wind chill.  Lucky for us at AU, we’re not tied to the culture of a particular brick and mortar institution and the view of AU we present to others is largely of our own creation.

Fly on the Wall—As the Mercury Drops Don’t Drink the Kool-Aid!