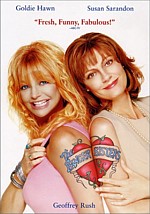 Take one dose of Goldie Hawn with a super-sized bust, add Susan Sarandon as an uptight mom and mix with a pile of people all questioning their potential and what do you get? This movie.

The film got all but panned on the TV write up so I was wary taking the time to watch it (especially since I just climbed into an intensive course recently). But I’ve seen so many good films that received crappy reviews that I gave the chick flick a chance. It’s worth it. It’s fun!

Goldie is a hoot as barmaid, Suzette, who is recently fired from her job and is all but broke. An Academy Award winner for Cactus Flower, Goldie makes us laugh as she decides to plop into her beaten down old car and drives to see her “sister,” Lavinia, a.k.a. Vinnie. Long ago they were nicknamed the Banger Sisters for their groupie habits, but years have gone by and half of the duo is completely different. Goldie is still stuck in the “?60s.

Academy Award winner Susan Sarandon pulls off the role as an uptight mom who gets goaded by Suzette into loosening up. Since Goldie just won’t buzz off she’s all but forced into it. Goldie remembers another woman:a buddy who loved rock “?n’ roll just as much as she did. Now Vinnie’s the wife of a lawyer who has designs on politics and she’s forever wearing beige and pearls to make it work.

Vinnie’s children, Hannah (Erika Christensen) and Ginger (Eva Amurri) bring Goldie and Susan back together when the girls laugh at the dinner table at the notion of mom ever being cool. It also loosens mom up and makes the kids look awfully tame even when Hannah is caught doing acid by Suzette and the youngest mouths off to everyone.

Suddenly mom’s had enough and brings out the party get up – she does an amazing haircut in the bathroom that I wish I could pull off– and goes off to party. True to type, after being asked to dance by a local hottie she goes into a long song and dance about why dancing with him is impossible! After a couple of drinks and dances they stumble home and Susan pulls out a secret stash she hasn’t opened in twenty years:ahem! The Rock Cock Collection!! There’s even a pretty good look at some supposedly famous ummmm members and laughs ensue as everyone suddenly pops down to the basement at just the wrong time. Mom isn’t looking quite so homespun suddenly.

Now I have to mention that Academy Award winner Geoffrey Rush is in the film as well. As a knight on a white steed – well almost – he just happens to arrive on a dirty bus when Goldie is out of gas and has no cash on her. Since she’s going to the same place, he offers to buy the gas if she’ll drive him. Unfortunately he’s not the best company in a car. He insists on telling her the “gruesome” story of two flies that sat on the back of his hand and did the fly mating thing! She is unable to take this uptight guy seriously. But when she finds out that Geoffrey’s character, Harry, plans to shoot his father for being so mean to him all his life, Suzette gets closer to him.

What happens is a glorious mess that keeps winding everyone back to Suzette. She is the key to the kids finding out about their mom’s history – the one they knew nothing about! They are incredibly nosy about Mom’s past suddenly.

The eldest, Hannah, is caught in the pool with her boyfriend doing the nasty while several empty beer bottles decorate the side of the pool. Mom has a conniption over all of this and Hannah can’t get over her bad luck at having a perfect mom who never appears to do anything wrong.

The youngest wigs out at being hauled into the hospital when her sister gives her the keys to go out driving “?without a license.

When mom loosens up, Harry gets lucky, and the eldest graduates school, life starts to straighten up. Except that suddenly Harry is missing and he has the gun! It turns into a lovely, but fun ending and should be enjoyed by those adult-enough to see the film. Make sure the kids are in bed”?and asleep.