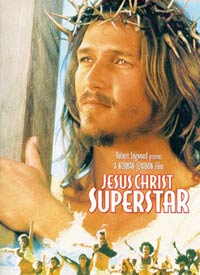 Norman Jewison’s film is a real masterpiece for me. I watch this film every time it comes out on TV and it never fails to leave me sobbing like the twelve-year-old I was when it first came out. Although it is technically supposed to be a reenactment of the life of Jesus it can only fit in the last three years. His childhood is missing, and so is that debated block of missing years.

The film opens with the blazing hot sands of Israel being churned up by a hippy-style bus arriving… this is a musical and the overture is barely heard, like the opening to Ravel’s Bolero. The bus parks in the middle of nowhere and a pile of modern day people pile out. They unpack the bus and start putting on costumes and make-up. Hair is simple, unless you count the wacky wigs for some of the background characters.

The score, by Andrew Lloyd Webber with lyrics from Tim Rice, is modern but it doesn’t seem dated to most. It has a rock basis but amazingly has other time’s styles thrown in.

Ted Neeley, as Jesus, is my image of the man – or myth, depending on your point of view. I am amazed that his voice is so strong and yet so lyrical”?often hard rock “belters” have difficulty with other song formats. I have seen Neeley, in the role he’s never shaken off, performing an abbreviated version of the musical on the road. I’m delighted to say he can still hit every note exactly as he did in the film thirty years ago. The Garden of Gethsemane still gets shrieked standing ovations every time.

Yvonne Elliman is a lovely Mary Magdelene. She has a velvet voice that demands respect. Her performance is sensitive and she is unforgettable as the only one grieving as Jesus hangs on the cross.

The Hebrew rabbis in the film are the most amazing pair of duet voices ever! How did Norman find these guys? One with the most amazing baritone and the other with a pixie-high voice! Together their voices are astounding.

This cast is memorable:at least to me. When this came out I had been geared up to deal with leaving Edmonton and go and live in Scotland with my obsessive-to-live-there mother. Suddenly I was faced with an emergency appendectomy. I didn’t have a very nice time at the hospital, was faced with leaving all my friends and I wanted one thing:to see this film. She was sure we wouldn’t have time and I’m sure that she fretted the entire time we were in the theatre. I, however, was transfixed the second the film began. Maybe my fellow psychology students will say it is an emotional memory -fine”?I only know that this film leaves me with goose bumps, jumping up and singing certain songs and bawling. That’s quite the latitude!

Catch it the next time Bravo TV plays it in Canada and see if it’s your cup of tea or not. Even if you aren’t a Christian”?you may appreciate a finely done project and Mother Nature at her most awe-inspiring.

If anyone knows where Norman Jewison found that amazing cave they used, please do email the Voice and let me know. I’m breathless every time I see it.