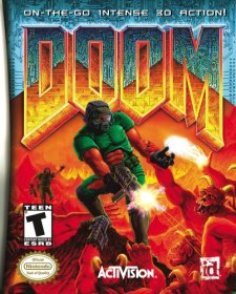 Now, I’m not normally one to follow video games avidly; I do not own any consoles, hand-held or otherwise, and the only one I ever have had was my dad’s old ColecoVision from when he was a kid. I’m shocked by the way that people can become so utterly engrossed in fantasy worlds like SecondLife, EverQuest and World of Warcraft that they actually file lawsuits for virtual damages, and the fact that the latest Nintendo system, Wii (pronounced ?Wheeee!?; doesn’t that sound fun?), actually has built-in reminders that pop up every 15 minutes or so, suggesting that the player go outside and get some air, because people are just that crazy about sitting in front of screens.

The only frame of reference I have for this game craze is the mid-90s, when I was loyally obsessed with DOS-based first-person shooters. I must have spent half of 1995 playing Doom I and II, so I vaguely appreciate the borderline schizophrenia enveloping MMORPG nerds in pixelated characters. Today I wanted to travel back a little bit to those glorious demon-blasting episodes that enriched my life so much, with a look at some of the best games I ever played.

Wolfenstein is one of the first and remains one of the best. You are an American soldier captured by Nazis and taken prisoner to Wolfenstein Castle, where your goal is to kill everybody you can get your sights on. This game pioneered the style that would be adopted by every single FPS to come after it; simple taskbar display, strategic game play, and fast, near-sentient enemies, and It’s still fun after nearly two decades.

Doom has many instalments, including three DOS games, several console adaptations, and a Vin Diesel movie, and it is probably the most widely recognized and copied FPS series ever. Even though most of the elements, like the main character, weapons, level textures, and game play are lifted directly from Wolfenstein, this is forgivable since they were both made by the same company.

The major difference here is that the levels in the game have become puzzle based, forcing the player not just to be a skilled demon hunter but a fast-thinking problem solver as well. The all-MIDI soundtrack has tributes to Slayer, Anthrax, Sepultura and lots of other metal gods, making it the toughest MIDI ever, including Anton Maiden, the guy who killed himself over an online argument about how tuff his MIDI was.

DN3D is essentially a combination of the original two side-scrolling Nukems with the play style of Doom. Again, this is a very puzzle-based game with smart, quick enemies, but Duke introduces a lot of elements that were non-existent with previous shooters. For one thing, it has a sense of humour, stealing pithy one-liners from Ash (Bruce Campbell in Sam Raimi’s Evil Dead) and other B-culture heroes, and incorporating plenty of gratuitous bitmap babes. There are also numerous bonuses like inventory (the ability to store items for later use), jetpacks (the introduction of totally three-dimensional game play), and triggerable weapons like pipe bombs and laser-activated mines. Groovy.

Hexen is a witchcraft-themed version of Doom, where you play a hooded initiate of some kind of clandestine group out to slay monsters by magic and might. Though early console games like Final Fantasy and Gauntlet introduced medieval-themed puzzle solvers and mana?a magical energy used to cast spells?Hexen and its sequel Heretic were the only games at the time using these concepts in an FPS. Like Doom, this game is limited to moon-boot gravity (i.e., no jetpacks or jumping around; You’re stuck permanently to the floor until you fall off something) and takes itself pretty seriously, but has excellent levels easy to waste a sunny afternoon on.

Now this one really shook the foundations of first-person shooting: You’re piloting a tiny spaceship through loads of underground mines on distant planets, which means that It’s not just your standard labyrinth full of monsters?It’s played in three dimensions at all times. Adapting to the controls makes you a bit queasy at first, but this game has all the best parts of those other games and more, making it well worth playing.

There are three instalments in the Quake series, which was a revolutionary release to the FPS world; sharper graphics, simplified game play, awesome weapons like the nail gun, and a non-MIDI soundtrack written by Trent Reznor of Nine Inch Nails. Once these games got online they spawned death-match games like Medal of Honor, Soldier of Fortune, and many, many more. This is a lot of fun to play.

What? A game about killing coverall-wearing, rebel-flag-flying, chicken-molesting, Democrat-voting, true-blooded Americans? Well, before we get all incensed and write congress a letter, let’s see what actual gamers think about the subject of racism in their video games. Yup, thought so: still considered fun.

Get A Promotion or Raise Despite a Serious Health Condition