A young girl is shocked and dismayed when she secretly observes what she takes to be a shameful act between two people she loves. She isn’t ready for what she sees and so experiences it as a violation of her consciousness. Her resolve tightens as cognitive dissonance throws her neurons into a whirlwind, and a series of arbitrary events leads to an accusation that robs the two people she loves of their happiness.

Briony, the girl, is even at this tender age a writer. She has been disciplining both her perceptions and her imagination and training herself to inhabit the bodies of others in order to feel what they feel. When it comes to crafting a fiasco, she is especially well equipped.

Make no mistake; the young writer is every inch the vengeful god willing to damn the unrighteous to a life of misery with a word from her lips.
Another problem is of course that reality is profoundly unjust. The innocent suffer, the guilty go free, women are ravished, the poor are humiliated, and the powerful wallow in corruption. It isn’t a world in which to toy with reality.

The charmed and sheltered world that falls away in the wake of Briony’s falsehood, lovely as it is, is a world of irritating upper-class twits who speak of liberating the lower classes while they leave the servants straining over heavy luggage. 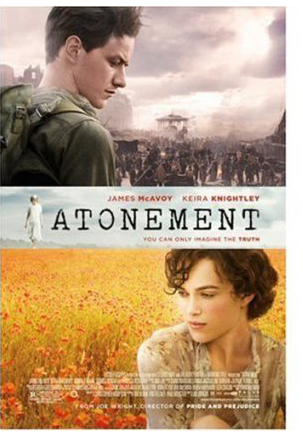 But the world that replaces this insular stateliness isn’t pretty; It’s a place of war, squalor, backbreaking work, and foul smells.

As a young adult Briony is a lonely god grieving the loss of a world which, in a sense, she both created and destroyed. Briony seeks to do penance for her false charge through nursing, trading Cambridge for a life dressing wounds and scrubbing bedpans. She sees nursing as a means of undoing her wrong although in the end it is writing which for her comes the closest to rectifying the imbalance she created in the world.

Briony’s public service is in no way an abdication of herself, or of her writing self; she is told by the head nurse that there is no Briony, only a Nurse Tallis, but she tells a dying French soldier, ?Je m?appelle Briony!? She continues to write secretly while studying nursing.

Entering any kind of public service is not alien to the writing life, and is often a necessary part of the mindful writer’s journey. It is one of the things that can save writers from the artistic self-absorption that sickened the symbolists and silenced so many writers during the Holocaust.

The writer is often one who is unhappy with the world as is and eager to reinvent it, or even to create other worlds entirely. This mindset sometimes mutates into an infantile God complex in which the writer feels entitled to the invention of reality.

To some extent reality is in fact what you believe it to be; the problem comes when others do not share your sense of that reality. Conflicts of certainties have power to destroy because they tend to strengthen in polarity as time goes by, which is why the writer’s obligation to express her personal, individual perception of the world as she truly sees it is every bit as significant as any claim to artistic freedom.

Atonement manifests eight of The Mindful Bard’s criteria for films well worth seeing: 1) it is authentic, original, and delightful; 2) it makes me want to be a better artist; 3) it gives me tools which help me be a better artist; 4) it displays an engagement with and compassionate response to suffering; 5) it inspires an awareness of the sanctity of creation; 6) it is about attainment of the true self; 7) it stimulates my mind; and 8) it poses and admirably responds to questions which have a direct bearing on my view of existence.