The Skinhead, the Rapist, the Terrorist, and the Country Parson

?And the moment that you wander far from me
I wanna feel you in my arms again . . .?

The Bee Gees, ?How Deep is Your Love?

Pastor Ivan brings parolee Adam to a halfway house he runs in his church. On arriving at the church Ivan introduces neo-Nazi Adam to the garden’s only apple tree (clearly a symbol for the tree of knowledge), brags up the tree’s fruit, and tosses Adam an apple.

In a telling allegorical twist, he commands the aptly named Adam not to eat the apple because it isn’t ripe yet.

The Bible in Adam’s room keeps ?accidentally? falling open to the book of Job until Adam finally reads it, warping its message to Ivan’s undoing.

Ivan, like Job, refuses at first to acknowledge that the calamities that befall him are signs of a cruel and loveless God. In the face of Adam’s conviction that all is evil Ivan calmly insists that goodness will always rule.

Here, for example, is Ivan’s funeral oration for a parishioner, a former Nazi concentration camp officer: ?Poul learned that It’s futile to fight good because despite all the cruelty, screaming, and tears he had caused in his youth he realized in the end that this was just a mere moment. The ocean heaved, but it was a wasted effort. The world continued and good prevailed as always.?

There are many other humorous illustrations of Ivan’s infuriating detachment. On one occasion Ivan notices a picture of Hitler on Adam’s wall and remarks, ?What a handsome man! Is that your father??

When forced to swallow the truth about his own terrible suffering Ivan bleeds from his ear. It’s as if, like the God portrayed in some theologies, he is simply too pure to look evil in the face. 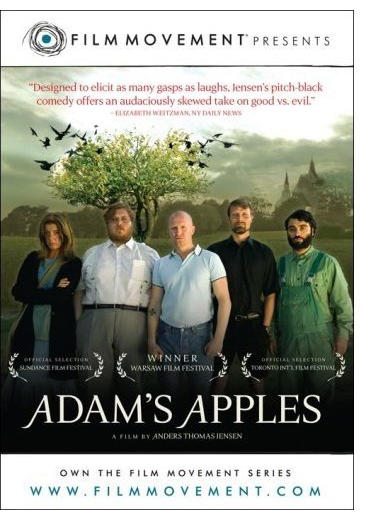 As the story develops it becomes obvious that Ivan is a wee bit wacko, hence has no proper spiritual guidance to offer, and is summarily dismissed and violently abused by Adam. (As Ivan takes hit after hit from the ham-fisted neo-fascist you can’t help but cringe; Mads Mikkelsen, in addition to being a brilliant actor, possesses facial structure so fine and elegant that watching it get pounded is like watching a Ming vase getting smashed with a baseball bat.)

This amazing film, directed by a former member of Dogme, received a surprising number of bad reviews from American critics, many from those amusingly dubbed “top critics” by Rotten Tomatoes. If there were a critics’ purgatory such carpers should be condemned to watch Adam’s Apples over and over until they get it.

But perhaps the blindness results in part from the fact that, in an age wherein the Bible has been reduced to a pietistic scimitar, a film like this is easily misunderstood. As Northrop Frye pointed out in reference to teaching the Bible to literature students (cogently arguing its place in the foundation of Western culture), conservative Christians resisted his teachings because they thought he was taking liberties with their orthodoxy, and atheists objected to the course material because they suspected Frye of trying to proselytize them. Both extremes missed the point.

This movie is all about the terror and heartache in confronting a great mystery, of coming up against that thin place where spirit prevails upon substance. It could very well have been given the same title as the Bee Gees song Ivan keeps playing on his van’s tape deck (and which Adam keeps switching off). This ?70s bubble gum ditty turns out to illuminate the meaning of Adam’s Apples in a way no one could have expected. Whether or not you believe such things are real, these could well be the words of a loving deity yearning for communion with the children of Adam and Eve:

?I believe in you
You know the door to my very soul
You’re the light in my deepest darkest hour . . .
And It’s me you need to show
How deep is your love.?

Adam’s Apples manifests 12 of The Mindful Bard’s criteria for films well worth watching: 1) it is authentic, original, and delightful; 2) it confronts and mocks existing injustices; 3) it renews my enthusiasm for positive social action; 4) it gives me tools enabling me to respond with compassion and efficacy to the suffering around me; 5) it makes me want to be a better artist; 6) it gives me tools which help me be a better artist; 7) it displays an engagement with and compassionate response to suffering; 8) it inspires an awareness of the sanctity of creation; 9) it is about attainment of the true self; 10) it provides respite from a sick and cruel world, a respite enabling me to renew myself for a return to mindful artistic endeavour; 11) it stimulates my mind; and 12) it poses and admirably responds to questions which have a direct bearing on my view of existence. 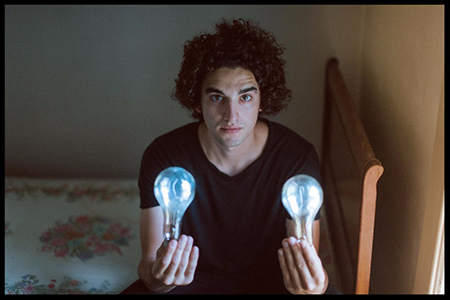 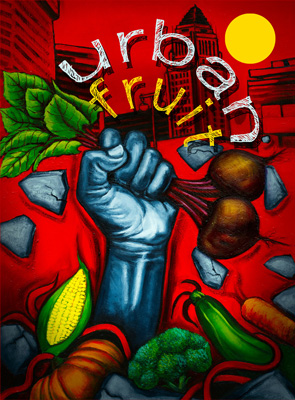