Clothesline Revival, They Came From Somewhere

?The mind is not a vessel to be filled but a fire to be kindled.?

?You can lead a horse to water, but if you can get him to lay down on his back and float in it, then you have something.?

Gentle music lover, do you remember the first time you realized that music could be used as a healing balm for your weary soul, an elixir of comfort and joy in the Valley of the Shadow of Death? Do you remember what you were listening to at the time? Well, now you can relive that introspective epiphany with Clothesline Revival’s newest album!

They Came from Somewhere is a bracing, life-giving thrill ride, marrying the most artful audio wizardry with the most intense and authentic American roots sounds.

The combination is practically combustible. There’s just something about the melodies, the little bits of accompaniment that add just the right accent, the melodic riffs so evocative they almost talk. Or transcend talk. 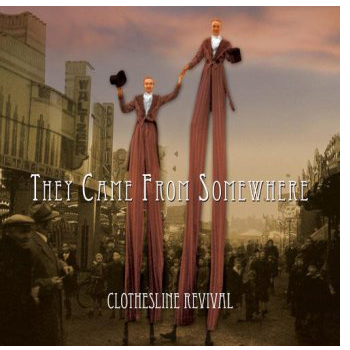 There is an absurdist theme that permeates the package: the album cover is based on a photo throwback to an era when everyone was supposed to have been happy, featuring a couple of stilt walkers at the Birmingham Onion Fair, and the title is like a Zen koan, a secret door opening into the cloud of unknowing.

I’ve been a shirt-waving Clothesline Revival zealot ever since I first heard their version of ?Little Maggie,? and I’ve awaited the arrival of this CD like an eager pup. (Front man Conrad Praetzel has the dubious distinction of being one of the Mindful Bard’s stalking victims, and last year I had the pleasure of interviewing him about his earlier recordings.)

This album manifests a more carefully refined art than that found in previous Clothesline Revival albums but not at the expense of sonic vitality. In spite of the breathtaking originality of this music, nostalgia breaks like waves on the heart as Praetzel dips into one style after another.

?Snake Walk,? for example, sounds like ?60s rockabilly funk while ?Return to Iona? mixes what sound like car factory clankings with a lazy old country slide. ?Beautiful Home? is a touching tribute to America’s mountain heritage and the propensity to an intense weird spirituality in that country which even now shows no signs of dissipating. Hallelujah.

Song titles carry a heavier weight in instrumental works but sometimes the need to distill meaning into a brief moniker?like ?Orange Clown Train? or ?Voice of the Lobster??is all that genius requires.

Unlike earlier Clothesline Revival albums, which leaned heavily on archival vocal and instrumental samples, this album is all original material (and original rhapsodies on traditional material like ?John Henry?), much of it written or co-written by mastermind Conrad Praetzel.

Really, really hope to hear this music in the movies soon. Even a bad movie. I could watch dandelions grow to this music.

In Conversation With . . . Conrad Praetzel