Articles
The Voice
In Conversation With . . . Janet Klein, Part II

Janet Klein has amassed an international cult following by singing little-known songs of the 1910s, ?20s, and ?30s in period dress, with the mannerisms of a Betty Boop with an art degree. Her repertoire includes Yiddish tunes, Tin Pan Alley, early hot jazz, ragtime, vaudeville, and novelty tunes. Janet recently took the time to chat with Wanda Waterman St. Louis about her band, her custom ukulele, and how she found her true calling. See the first part of this interview here.

My Own Curious Pleasures

I came up through school set on becoming a painter or fashion designer. When I went to UCLA, I was in the art department, but I spent a lot of time in the music library there with the headphones on. I found some great treasures. I was a very enthusiastic student and just couldn’t believe my great luck in being able to poke around all the libraries of departments I wasn’t even in; I just wanted to soak it all up.

This was before the days of the Internet, so you really had to work hard to find things. I used to find things in the record library like German records, and I would call the state librarian to get translations. They were so helpful; I could ask any darn question and they’d call me back!

But I was only collecting things for my own curious pleasures; I hardly had anyone to sit down and listen to these recordings with, so I just kept them to myself.

During my time at UCLA, I dabbled with performance art. I felt like I had a little bit of the ham in me, and had to experiment with things a little bit. I wanted to be a chanteuse, but I figured that would never happen. So I decided that I would try poetry recitation, because the lyrics of the old songs were so inspiring. I started writing poetry and I came up with my little presentation: I’d have candelabra and wear really fancy dresses and recite my poetry. And people liked it!

I added a little bit of triangle here and there, and then I picked up the ukulele. And that got me into a lot of trouble. People told me, Janet, your life is not going to be the same.

I grew up thinking that you were an artist because That’s what you had to do, and it was only after I came to LA that I saw how the celebrity went with it, and realized all the things that you had to do to have a career. I wrestled with that; I was never very good about talking about my artwork. But when I discovered the wonderful world of LA poetry, it was really inspiring. I felt at ease with the poetry world and really loved the attitude of people there.

I was playing some of my collected songs on my ukulele. One of my first great hits was a song called ?Love is a Boomerang.? I had a recording of it by Edith Wilson, who is probably my polar opposite in the land of vocal stylings. It was a really cute song, and I sang it here and there and people always asked me to do it again.

So I learned a few more of these songs and worked a song or two into my poetry readings. Along the way, I met this fantastic record collector who introduced me to Brad Kay, a great ragtime pianist. Brad had a little trio that he was working with at the time, and I asked him to play some music at one of my poetry readings. 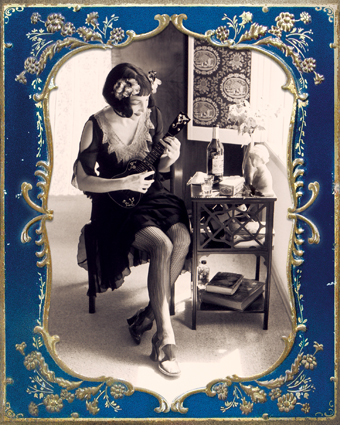 That was probably the first night when I read my poetry and added a couple of songs on the ukulele from the 1910s and ?20s. It felt pretty great. I loved to share these great musicians, and my motto at that time was Even if I blow it, even if I’m not so hot, I feel like I’m doing a public service by sharing some of these great songs I’ve been collecting.

A Ukulele Unlike Any Other

Then I met a luthier in Santa Cruz who was making these beautiful ukuleles. He had a black lacquer ukulele in his studio, and I couldn’t get over how wonderful it was. I realized that I could actually afford a custom ukulele! So I went home and started drawing my fantasy ukulele. If I could afford a custom ukulele, I was going to have something unlike anybody else’s ukulele.

I had been to a wonderful museum of musical instruments in Europe, where I saw gorgeous things from the baroque period: mandolins and lutes with all kinds of inlay work. I had never seen a ukulele that had inlay work?was that even doable? I sent my design to the luthier and he said, ?I can do that!? When I got it, it was March, 1996.

A Heaven of the Likeminded

Shortly after that, I got invited to a party. I brought my ukulele, and it turned out to be one of the most extraordinary evenings I’ve ever had. I somehow ended up in a room full of illustrators who did work in period style. The host was a Betty Boop expert, and he’d written books on the history of graphic design. I told him I’d been collecting these beautiful sound sheets from the 1920s, and I opened up my trunk and showed him these sheets. And not only was he familiar with all this music, but he started to croon away…