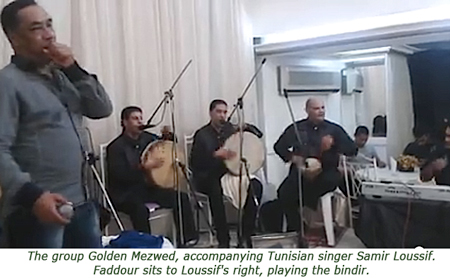 “I think we’re about ready for a new feeling to enter music. I think that will come from the Arabic world.”
– Brian Eno

Meeting Gaddour
We encounter Abdelkadr, who is better known as Gaddour, at our local café, where we often see him coming and going. He’s a friendly guy with a lot of friends, but we don’t pay him much notice until we see him performing on television with a large mezwed ensemble, singing and playing bindir (a lap drum like the Irish bodhrán, but played with the hands) and dharbouka (an hourglass-shaped drum held between the thighs and also played with the hands).

we’re even more intrigued to discover that in 2007 he and his band performed at a music festival in Montreal.

What it is
Mezwed is the most common musical genre in Tunisia, named after its main instrument, a kind of bagpipe made from?you guessed it?the skin of a sheep or a goat. (My Tunisian husband refers to the bagpipe as “the Scottish mezwed“). The other defining feature is that mezwed music is based on traditonal Berber scale rhythms, which Gaddour has clearly mastered.

Like blues, It’s a rural, working class mode of music that went viral, was embraced by all classes, and is now popular at weddings and parties. There are special dances that accompany it, even trance-inducing ones. At one wedding I saw a girl dancing in an aggressive side-to-side stomp, whipping piles of black hair in violent circles.

A Relative Musical Purity
Unlike most of the other African musicians I’ve interviewed, Gaddour hasn’t been heavily influenced by American music. His listening is pretty much restricted to mezwed and other Arab genres, and it appears that the same can be said for the musicians with whom he performs.

Nonetheless, mezwed appears to have always been open to outside influence. Today it contains elements of rap and hip-hop, which isn’t surprising when you know that the songs resonate with the same obsessions, the issues uppermost in Tunisian hearts and minds?love, political problems, family relationships, immigration, and racism. 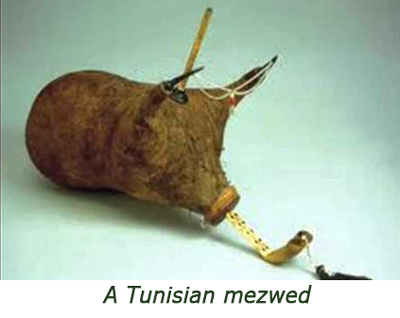 No Conservatory
Gaddour informs us that no formal training exists for mezwed musicians; new musicians are taught within families or by friends. He came from a musical family, but being much younger than his siblings, no one really had the time to teach him, and so his education came from the friends he grew up with, many of whom now perform with him in the grand ensemble, Golden Mezwed.

It’s a little surprising to learn that the government does little to support this rich source of social and financial capital, and yet the lack of government support may serve to keep the genre authentic and fearless in condemning injustices.

But It’s not that the government has no hand in the music business here. In order to be permitted to perform publicly musicians must visit the Ministry of Culture and pass a musical exam every five years, after which they’re awarded, if successful, with a certificate of professionalism that opens the doors of employment.

Gaddour has been successful enough to land a lot of local gigs, televison appearances, and shows in Europe and North America, where he and Golden Mezwed perform for Tunisian ex-patriates yearning for the sounds of home. 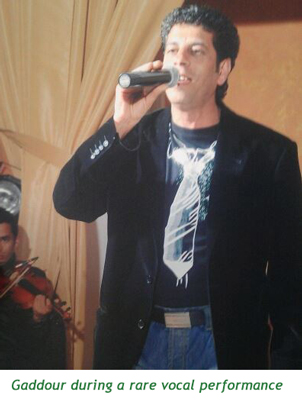