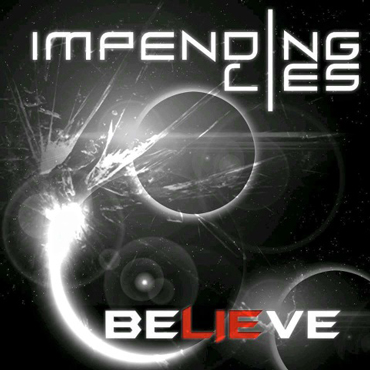 I am always excited to listen to and learn about a new hard rock band. I am always amazed by the sounds that hard rock bands come up with. Some bands have included pianos, violins, and flutes in their songs, which brings the tones and melodies to another dimension, and the genre of hard rock continues to grow. When I was given Impending Lies? latest EP to review, I was thrilled and excited to listen to them, but hesitant as well. What if they didn’t live up to my expectations of a hard rock band? Well, I am happy to say that Impending Lies? music is all that I could have hoped for and more.

Founded in 2011 in Cleveland, Ohio, Believe is the band’s latest release. Over the years Impending Lies has shared the stage with many outstanding acts like Godsmack, Shinedown, and P.O.D. to name a few. Although their music is typical of the hard rock genre, Impending Lies creates songs that are memorable. The songs on Believe will grab your attention and never let go.

The tracks on Believe remind me of bands like Finger Eleven, Theory of a Deadman, and Saint Asonia. The music varies from classic rock to hard rock that occasionally crosses the boundary to metal.

?Separate Ways? is a cover of Journey’s ?Separate Ways? with an added flare. In addition to the sounds that made the original famous, Impending Lies offers fans and listeners a classic song with a metal twist. I am very fond of the original song, and I found myself loving this cover because it felt like this song contained everything that should be in a modern rock ballad without ruining the sound. Impending Lies did a fantastic job of paying homage to a classic.

?Let Go? contains more elements of metal than the other tracks on this album. I especially enjoyed how the song begins with an effect that sounds like a scratchy vinyl record. The rest of the track exhibits the typical elements of heavy rock, but the occasional metal vocals stop the song from becoming stagnant. The variety of the singing is the best aspect of this song. At times the singing is rock, other times it becomes bass heavy then it switches to metal. And although the music is great, it is the vocals that are the most prominent element of this track.

The title track ?Believe? is, in a word, epic. Beginning with a light touch of electronic effects, this track transcends the typical heavy rock song. The lyrics are stunning, the music is upbeat but uniquely dark, and the overall harmony is beyond anything that I have ever heard before. I absolutely love this song.

Believe is a fantastic EP and I highly recommend it to lovers of classic and hard rock, and metal. Believe and Impending Lies previous EP The Storm can be found on iTunes and in the band’s online store