Articles
The Voice
Book Review—Making the Monster: The Science Behind Mary Shelley’s Frankenstein 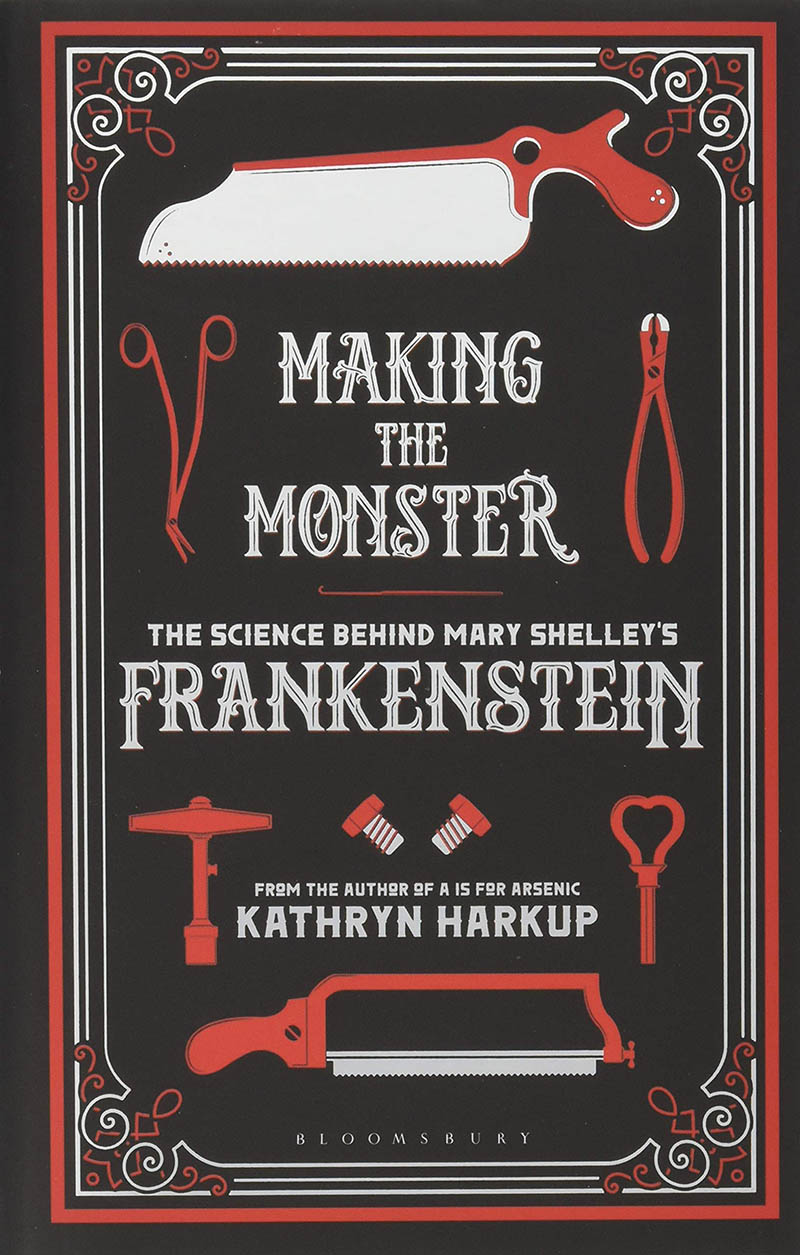 Title:  Making the Monster: The Science Behind Mary Shelley’s Frankenstein

Soon it will be Halloween, and the classic horror film depiction of Frankenstein’s monster—with the flat skull and bolts on either side of the neck—will be a common sight in toy stores and seasonal pop-up costume shops and may even be seen on a few doorsteps.  Although Frankenstein certainly fits into the horror genre, it’s also the first science-fiction novel ever written.  The story—about a scientist who pieces together a creature from corpses, brings it to life, and as a result loses everyone he loves—is over two-hundred years old.  At least part of its enduring relevance may be found in the ethical questions it raises about scientific experimentation.  The novel has been invoked in the development of genetically modified foods (“Frankenfoods”), the threat posed by nuclear weapons, the implications of manipulating the human genome, and the consequences of artificial intelligence.

While modern readers may see the novel as relevant to today’s concerns about scientific progress and ethics, science writer Kathryn Harkup illustrates how the book reflects the reality of Enlightenment era science.  In Making the Monster: The Science Behind Mary Shelley’s Frankenstein, Harkup explores a period marked by a burgeoning interest in the internal workings of the human body, a thriving trade in grave-robbery, and ghastly experiments on corpses.

Mary Wollstonecraft Godwin was still a teenager when she started to write the legendary work.  She was living with the English writer Percy Bysshe Shelley, who was still legally married to his first wife Harriet.  Mary, Percy, Mary’s stepsister Claire Clairmont, poet Lord Byron, and Byron’s physician, John Polidori, holidayed together in Switzerland during the summer of 1816.  In “the year without summer”, the weather was far from enjoyable, as ash from a volcanic eruption in Indonesia the year before had caused a global decrease in temperature.  Violent storms kept the group indoors and to amuse themselves, the party read ghost stories.  Byron proposed that each of them should write their own supernatural tale.  As a result of this challenge, two stories were published, and neither one was written by either of the established authors.  Polidori wrote The Vampyre, and Mary wrote Frankenstein.

The original title of Mary Shelley’s book was Frankenstein; or, the Modern Prometheus.  Prometheus, a figure from classical mythology, is punished for stealing the secret of life from the gods, and using it to bring a man fashioned from clay into being.  Harkup shows the reader how the theme of a creature made from the earth is reflected in a number of cultural traditions, but surprisingly she doesn’t include the Bible story of God forming the first man from clay in Genesis (2:7).  Given that Victor Frankenstein is a man taking for himself the role of God, the reference would have been particularly suitable.

Victor Frankenstein, however, doesn’t form his creation out of clay, but rather from dead bodies.  In eighteenth century, he wouldn’t have been the only person seeking corpses; in England, the study of anatomy had become a required course for students studying medicine, and many enterprising anatomists set up their own private anatomy schools.  These developments spurred a great demand for corpses, and too few were available through legal means.  But eventually it was Britain’s legal code which helped to put more bodies into the hands of students and educators.

In 1752, parliament passed “An Act for better preventing the horrid Crime of Murder”, commonly known as the Murder Act.  Many crimes were already being punished by hanging, and politicians wanted to make the sentence for murder especially humiliating for criminals and their families.  With the enactment of the Murder Act, the bodies of executed criminals were handed over for public dissection as part of the sentence.

Harkup describes how the hanging and anatomizing of criminals sometimes led to horrifying incidents.  The short-drop hangings used at the time didn’t break the prisoners’ necks, but instead killed them through slow strangulation.  Death can sometimes be difficult to prove today, but was more challenging in Shelley’s time, when stethoscopes had not yet been invented, and the determination of death relied on the absence of a heartbeat.  In some instances, it was actually reported that executed criminals – though presumed to be dead – regained conscious as they were being cut open by anatomists.

Even with the supply of additional corpses provided by post-mortem punishment under the Murder Act, there were still too few bodies.  This prompted gangs of grave-robbers, also known as resurrectionists or sack-‘em-up men, to raid cemeteries at night to meet the need.  It was a lucrative career for those willing to do the work.  With his own background in grave-robbing, the surgeon and anatomist, John Hunter used gangs of grave-robbers to supply his private anatomy school and acquire anatomical specimens for public display.  According to Harkup, Hunter also had an interest in trying to resuscitate the dead, and may have inspired Shelley’s portrayal of Victor Frankenstein.

The first edition of Frankenstein provides no explanation of how the scientist brings his creation to life.  In the introduction to the 1831 edition, however, Shelley mentions galvanisation, or electricity, as the source of this animating power.  Harkup delves into the eighteenth century’s interest in electricity, including its effects on animal and human bodies.  Luigi Galvani investigated the source of muscle contractions, believing that electricity—known as “animal electricity” (now called bioelectricity) —was the cause of neuromuscular activity.  His experiments used the severed legs of frogs to demonstrate how static electricity caused the muscles to contract, and the legs to move.  Years later, Giovanni Aldini, Galvani’s nephew, began using slaughtered animals for his electrical experiments.  Eventually, he conducted public exhibitions in which he applied electrical shocks to human corpses, in particular the body of George Forster, who had been convicted of murder, executed by hanging and his body was handed over for dissection.  Electrical shocks were applied to the corpse’s head, producing a wide-range of facial contortions.  Shocks to the body caused limbs to flex and move.  As Harkup suggests, it’s easy to see how demonstrations like those performed by Aldini helped to foster the belief that an electrical charge could reanimate dead tissue.

So when Mary Shelly wrote about a scientist giving life to a body that he had assembled from a collection of tissues, it did indeed seem to be within the realm of possibility.

Harkup presents a rich historical and scientific background for Frankenstein, but also shows how Mary Shelley’s own education and experiences influenced the story.  Shelley’s travels to the European continent, her parents’ social circle and their writings, her husband’s interest in science and the occult are also examined by Harkup.  By itself, Making the Monster is a fascinating book, but it will make the reader look at Frankenstein with a greater understanding of Mary Shelley’s world.  Or, it might just might provide a spooky read at Halloween.