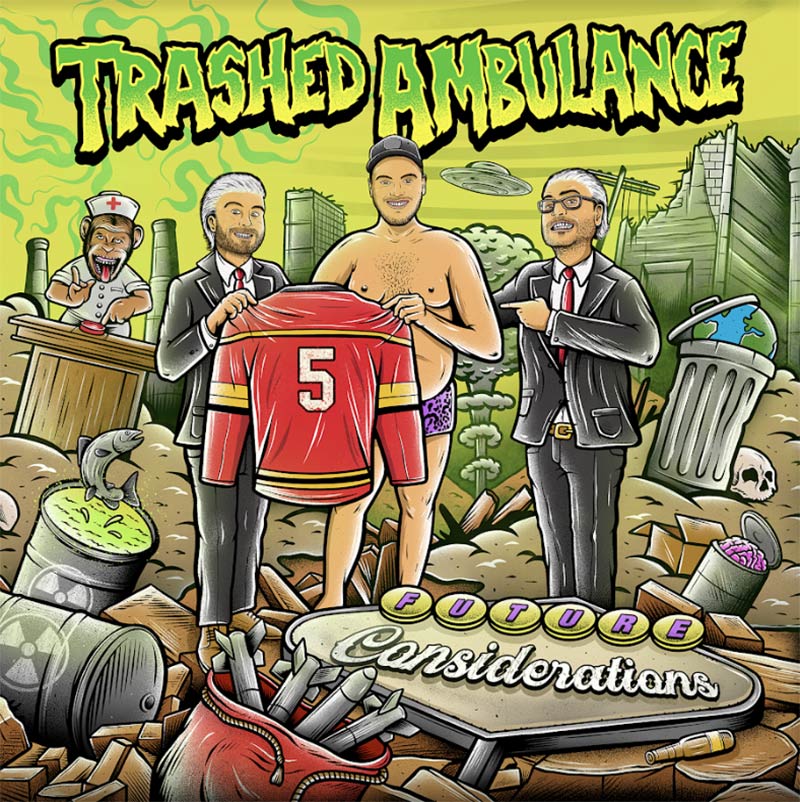 Alberta punks, Trashed Ambulance, have released their most recent album, Future Considerations. The album is available anywhere you get your music.

Trashed Ambulance calls this album “33 minutes of angry yet hopeful punk anthems” and is inspired by artists such as Pulley, Face To Face, and The Flatliners. I really wish the band would put more effort into their online persona—there’s not much information available about the band itself or about the album.

Overall, I wasn’t a fan of Future Considerations for several reasons.

First, most of the songs are extremely short. Eight out of the total twelve tracks are under 3 minutes, and three of those songs are around the 1:30 mark. Meanwhile, the last song on the album, “Next Door to Nothing,” goes on for 5 minutes and 34 seconds. The major jump between song lengths makes the album feel disjointed, while the myriad of short tracks feels underdeveloped and thrown-together.

Second, all of the songs are extremely similar in sound and content—it’s nearly impossible to tell which song is which. I also found that most of the tracks were lacking any kind of chorus or hook—instrumentally or vocally—making the most of the songs feel like one big run-on sentence. I didn’t feel any emotion or any musicality. There was nothing to vibe to, nothing to feel in your soul.

Lastly, the song “Stalk in the Park” is simply immature and offensive. The music video and the content of the song reminds me of an episode of South Park—the kind of content that young teenage boys would praise as the epitome of comedy. “Stalk in the Park” tells the story of a man getting drunk on a merry-go-round at a park and harassing a woman who is there with her children. The song ends with the man being taken to jail, the woman asking for a restraining order, and the man proclaiming, “I guess I’ll find another mom” (to stalk, I assume). This last line also makes me wonder if the band is implying that this man is actually on the prowl for children, which makes the song much, much worse.

This whole concept is so out of touch and frankly—creepy—that I can’t begin to imagine what Trashed Ambulance was thinking when they wrote this song. As a mom, a domestic violence survivor, and a woman living on this plant, “Stalk in the Park” makes me incredibly uncomfortable and grossed out.