Columns
The Voice
The Mindful Bard – An Inconvenient Truth

?When through the deep waters I call thee to go,
The rivers of woe shall not thee overflow;
For I will be with thee, thy troubles to bless,
And sanctify to thee thy deepest distress.?

In Cormac McCarthy’s post-apocalyptic novel The Road a man, leading his young son across a devastated America in search of food and human survivors, finds old newspapers warning of the brewing environmental catastrophe.

He feels a helpless rage toward the leaders (now dead) who had done nothing despite the warnings, as well as toward those who had so scrappily denied the impending doom.

A few years back I was riding a bus through Massachusetts on the way to visit my brother in New Hampshire. As usual I was sitting up front so I could talk to the bus driver, a habit I’ve kept up since discovering that bus drivers are treasuries of beguiling anecdotes as well as being fairly accurate barometers of public sentiment.

By then global warming was becoming hard to refute, so I pointed out to this bus driver, whose name was Tony, why it was so important for people to use public transport as opposed to driving cars everywhere.

?Yeah,? Tony mused. ?But here in the United States our economy is so dependent on car sales. It ain’t gonna change,? revealing one of the many lines of reasoning that has withheld from global warming the vigorous concerted action it has long required. 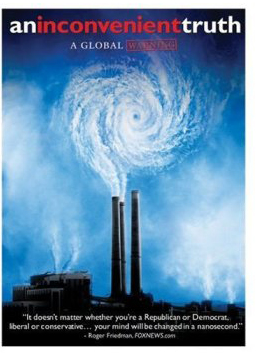 With several still and moving pictures of our planet Al Gore sets us up to appreciate the numinous quality of the home we’ve been so shamefully taking for granted. He also underlines an important point: This is us, at once enemy and potential victim.

Al Gore’s life is a beautiful illustration of how activism can be inspired and informed by experiences of loss. Losing a sister and almost losing a son worked together to create a sense of the preciousness of each human life.

Narrowly (and perhaps not legitimately) losing the presidency also helped Gore to marshal the fighting spirit required of those who would make the world a safe and joyful place for living creatures.

Gore’s life is a kind of microcosm of 21st-century activism; deception by governments, covert manipulations by big business, senseless deaths, shattering disappointments, and violent terrorist attacks should never have happened in the first place, and yet they have blessedly resulted in a pool of troopers determined to sacrifice lesser goods to The Good.

The untimely death of a loved one especially can be a turning point in how you see reality and your place in it. It can motivate you to take on any comers in the fight for global well-being. As the hymn quoted above suggests, your deepest pain can enrich, hallow, and enable you in a way that little else can.

An Inconvenient Truth lives up to seven of The Mindful Bard’s criteria for films well worth watching: 1) it confronts, rebukes, and mocks existing injustices; 2) it renews my enthusiasm for positive social action; 3) it gives me tools enabling me to respond with compassion and effectiveness to the suffering around me; 4) it displays an engagement with and compassionate response to suffering; 5) it inspires an awareness of the sanctity of creation; 6) it stimulates my mind; and 7) it poses and admirably responds to questions which have a direct bearing on my view of existence.