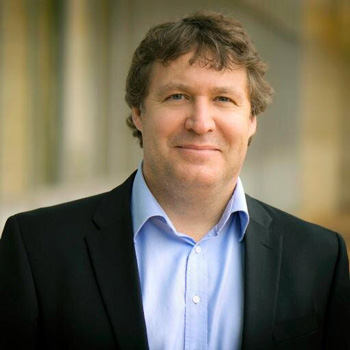 Dr. George Siemens is the founder of the theory of connectivism in education. Recently, he kindly consented to be interviewed by Marie Well of The Voice Magazine. Dr. Siemens was happy to provide us with very in-depth answers, and so this is the first part of the three-part interview.

Marie Well: You are a highly acclaimed researcher, receiving not just one, but two honorary doctorate degrees, if I’m correct. Please tell us about your greatest awards and acclamations.
Dr. George Siemens: Yes, I received two honorary doctorate degrees.
That is an interesting question. On the one hand, being recognized by institutions in the form of a doctorate is always a significant award and is intended to communicate some impact in the field or work that others may have found valuable. Aside from that, what I have found most satisfying academically is interacting with students–engaging with students in a number of technologies. Whether It’s building personal learning networks through technologies, such as social media, or whether it is teaching and engaging with learners, we are at a point in time at society–or the university–where it is no longer simply what we know that matters, but it is much more relevant that we are working in networks and systems to understand learning needs and challenges.

Admittedly, recognition in the form of a doctorate or an award is nice and appreciated, but in terms of personal satisfaction, I have to say, unequivocally, it has been the time with students and faculty through both less formal and formal interactions.

Marie Well: You have authored a number of books, including the Handbook of Emerging Technologies for Learning. Please tell us about this particular book and some of the emerging technologies you find most intriguing for the learning environment.
Dr. George Siemens: Short answer: The intent of the Handbook of Emerging Technologies for Learning was to capture what was happening in technology–in software–what individuals were using on a societal level and how that might impact what we do in a university or higher education setting. Actually, that handbook itself came about initially when I was at the University at Manitoba and asked to do a workshop with Athabasca University’s faculty and staff on the different types of technologies that were available. As a result, I started putting together what I wanted to present, it became apparent that there was enough activity here that it was worth trying to turn it into something more substantive. As a result, That’s where the idea of the book essentially came about. When I did the workshop with Athabasca, I turned it into a PDF.

The second part of your question focused more specifically on the technologies. In terms of the technologies that I think are most interesting these days, I think I would emphasize any tools or toolsets that broaden or enable the opportunities for people to connect with each other. What I mean by that is that can connect with other; it could be faculty connecting with other faculty or with students, and so on. I’m quite interested in tools and technologies that enable us to better connect with one another. This starts to get at the core nature of the university’s role within society. Traditionally, much of what we would have faculty do in a university setting, to simplify, would be to create curriculum, conduct research, and teach students core ideas within the discipline.

Many of these instructional practices were based on direct lecture, and there is nothing wrong with direct lecture; in many cases it can be a good thing. Unfortunately, when you are dealing with complex knowledge domains, it is more valuable to engage in dialogue interaction, and social processes. The intent then with the handbook, and the technologies that I’ve found to be particularly valuable personally, were to detail those that enabled engagement with others in conversation rather than for those technologies to be primarily be vehicles for pushing content to students. As a result, even now when I look at tools that are interesting, I look for a range of software tools in learning that promote connections, whether they are learning management systems like Moodle or whether it is social media that individuals use, like Twitter or Facebook. More innovative projects such as the Landing at AU lead by Terry Anderson and John, which provide more of a social distributed model of interaction.

My argument has been for over a decade now that if we want to understand the future of the university, what we really have to understand is how society works with information. How is information created? How is it shared? How is it validated? Once you understand the attributes of information, then the argument is, as detailed in a book called Reinventing Knowledge by McNealy and Wolverton, society’s institutions mirror what a society does with information. As a result, the future of the university is going to look like information looks today, meaning that it is global; it is networked; it is socially developed; it is validated through distributed and social processes; and so on.

Technology, in the early days of distance education, for example, consisted of texts and the mail system. Gutenberg’s press, the ability to print books, is a type of technology. The postal service enabled folks like Nelson Mandela to do their learning through distance education. The value of the technology and media we use is that it allows us to expand beyond limitations that we might have otherwise and allows us to connect with people from around the world through anything from mail system to telegraph system.

More recently, the Internet and the software that is build on top of that, enables us to expand some of the opportunities for improving our ability to connect with one another. As a result, when we talk about the role of technology in education, the big idea for me is that technology can make education today more human.

There is one camp that appears to want to make education more of an autonomous, almost soulless process, where learners could push buttons and jump through hoops. You see with some automated testing software and with courses that are essentially click-through courses with limited interaction.

For me, the experience of technology that I would want to see have, is one that makes learning more profound, more relevant, and more valuable. The reasons we have classrooms is because they were at the time the most effective technology for a society to educate its young people across consistent standards.

Unfortunately, in doing that, there were a few social elements that were lost, often exploratory and creative approach to learning. The model of Plato, of Aristotle and the academy, which was essentially knowledge as a social discourse process, had given away to knowledge as a transfer process with the development of classrooms at least a hundred years ago. Today, as we are starting to see the growth of digital technologies and global connectivity, I’m hoping that the role technology will play educationally going forward is one that will help to rehumanize and resocialize the learning experience so that, if you have thirty people in a class, it is not all thirty people learning the same thing regardless of what they know. Instead, it would likely be thirty people engaged with one another, but each one being able to find and get access to specific knowledge needs that they have.

Marie Well: What types of media do you include in your courses?
Dr. George Siemens: It’s a range. I use different media for different things. Essentially any technology can be used to communicate with students, though some are better at giving students control. Typically an LMS like say Moodle is used for online learning. It could also be a site like the Landing? giving students opportunity to connect and communicate content with one another. If somebody has a question about how to use a tool, and it is something that could be answered with a tutorial, I’ll just pick a piece of software called Jing, record a quick tutorial that tells you to click here, this is what you do there, and so on. Say it is a class or a synchronous session, I used pretty much any tool that allows video and audio, from Google Hangouts to Skypeto Adobe Connect to Elluminate, software years ago that came out of Calgary. I certainly use that for sharing information. I also use tools like Delicious which is the social bookmarking service. I’ve used toolsets such as Ning, which is for group formation. I’ve used Google Docs, Twitter, Google Plus, and the list goes on. The short view is that I use roughly any technology that allows me to communicate an idea to learners or that allowed me to engage in discussion with learners, whether that discussion is synchronous, in the form of Google Hangouts or Adobe Connect, or whether that interaction happens through asynchronous approaches, such as blogs or Twitter or discussion forums.

It is fascinating because of the number of tools that are available now. Different people you talk to will use a completely different set of tools. Some of the tools available now present academics with this huge intellectual buffet and you can choose the parts that you want. I’ll use Skype, and I’ll use Twitter, I’ll use Facebook. Someone else can say, I’ll use the Landing, I’ll use Adobe Connect, and I’ll use Google Plus, or whatever. It is a wonderful time to be in the teaching profession because of the range of opportunities available for the educator to contribute to learning. The other dimension is that students are able to control their learning. For example, one course that I was teaching had every other week a live session, but students decided that that wasn’t enough for frequent meetings, so they decided on alternating weeks, to hold their own live discussion so that they could discuss course readings. One of the big opportunities technologically is that there is a control shift. Rather than the faculty member or institution being the primary determinant of what we can and cannot do while we are learning, students are able to create their own spaces to interact on their own terms and have discussions. Even if a faculty member isn’t present, they can engage in active learning approaches.