Articles
The Voice
All the Music be Happenin’ Now – Truth, Rage, and the Tambourine Man 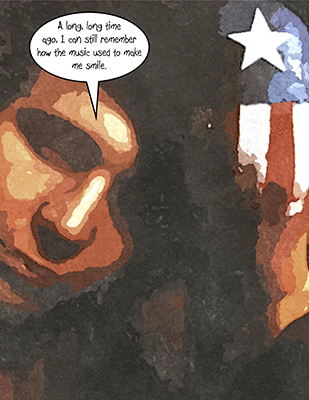 At 10:00 pm, November 17, 2000, Jade and I swung out the acoustics for a low-key jam. We were sitting on the floor of the living room, and the lamps were dim. Riffling through our raggedy chord and lyric sheets: Know this one? Yeah, love it. Let’s try it. Not in that key. What about G? Yeah, G’s good. Okay play it in G with the capo on the third fret.

Then take me disappearin? through the smoke rings of my mind
Down the foggy ruins of time, far past the frozen leaves
The haunted, frightened trees, out to the windy beach
Far from the twisted reach of crazy sorrow.
– Bob Dylan, 1965, “”Mr.Tambourine Man”

Pierre Trudeau had just died. Jean Chrétien was prime minister of Canada, and George W Bush had just beat Al Gore to the American presidency. This was long before I’d started using government leaders as musical forecasts, so it hadn’t registered with me then, but I now understand why such kickass punk was to come out of the next few years, putting us “far from the twisted reach of crazy sorrow.”

Sandy arrived, letting in indigo sky, black silhouettes of pines, and the glowing path of the timid moon on the Bay of Fundy. Later she was to describe the scene to a coworker: “My God, I thought I’d walked into a sixties love-in!”

Mr. Tambourine Man
On a Friday in 1965, Deborah in the Haight-Ashbury neighborhood of California got her waitress pay and went to the record shop to pull Dylan’s new album, Bringing it All Back Home, from the hands of the clerk just as he was about to slide it into the D section of the folk bin. She took the album back to the loft she shared with a bunch of other people, listened to it, and taught herself how to play “Mr. Tambourine Man,” having rightly determined it to be the most significant song on the album.

Then she took her guitar down to the street and played it for the prep school, grad school, and old school gypsies. For the rest of her life the memory of this event justified Deborah’s existence. Whatever failures and losses were to come, she’d been there, she’d done that. 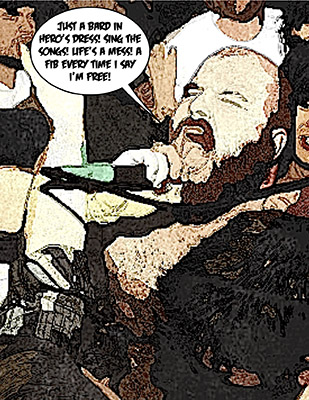 Where Was the New?
Jade and I weren’t playing for the gypsies, because the gypsies whodunnits’d flocked to Nova Scotia were now altered beyond recognition. We were, however, in a position to grasp the words of the song better than Deborah could have, and only because of all that had happened since 1965.

But where was the new for us? Why were we still playing “Tambourine Man?” Which 2000 album was so significant, so revelatory, and so transformative that we learned it and passed it on the day it was released? It wasn’t like the music had really died, as Don McLean hymned in “American Pie,” and if it had died, it surely didn’t die with Buddy Holly.

While we’re still trying to make sense of the past, we’re no longer inclined to want to “forget about today until tomorrow.” The school of hard knocks and years of meditating have brought us to a fuller understanding of what it means to “live in the now” as sixties philosophers urged, and why It’s important.

For the last twenty years I’ve been talking to musicians who’ve experienced profoundly stirring musical experiences, people whose childhoods were bathed in music like noodles in butter, people crafting startlingly original work, both delightful and meaningful. But the cultural context has changed. Our whole way of thinking about music and listening to it?and being influenced by it?has changed. And this has left a mark on the music itself.

We Never Asked to Be Heros
But back to Dylan, who never asked to be the poster child for the sixties radical resistance. He was revolted by efforts to get him to be the spokesperson for the anti-Vietnam movement. He resented attempts to deconstruct his songs in ways he never intended. (Doggett, 2007)And when people finally got that, they stopped looking for pied pipers.

Not even the soft-spoken Saskatonian Joni Mitchel, her dreamy manner aped by hippy girls from San Francisco to Cornerbrook, could lead the stardust, golden, million-year-old carbon back to the garden. She refused most requests to play for charitable causes. Efforts to get her to speak out for feminisim were rebuffed; in her opinion feminists rejected the world of the feminine that she embraced.

Since then most authentic musicians have shied away from direct affiliation with social causes. But the loss of the sixties culture’s expectation of a connection between music and social concern, while leaving creativity vulnerable to corporate takeover, at the same time opened doors to greater personal achievement, greater introspection and personal exploration, something which, as we’ll see later, couldn’t help bearing fruit in the form of compassion for the suffering in the world and the desire to use one’s art to speak to it in a healing way. 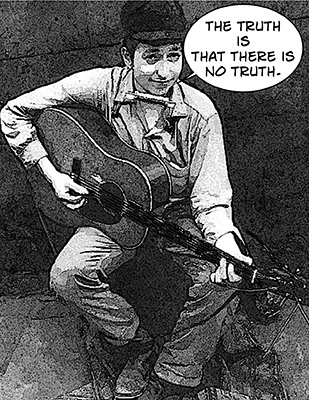 No Pure Genre
In 2000 I was as obsessed with music as I’d ever been. I was bringing my guitar to work. At home I had a vinyl collection that just kept growing because everyone was still chucking records. I played guitar and tenor banjo in an amateur Dixieland band and also in a fledgling jazz trio called The Radio Stardust Jazz Orchestra.

I was also in a folk group called The Same Boat. We played music from the historical Nova Scotian ethnicities, me representing the Celtic diaspora. I got in trouble with one fellow musician for diluting the purity of the traditional genres, mixing blues with reels, African drumming with First Nations chants, and Acadian music with old time country.

Why did I do it? Because there is no pure genre, and there has never been. It’s a truth we can no longer avoid.

ReferencesDogget, Peter. 2007. There’s a Riot Going On: Revolutionaries, Rock Stars, and the Rise and Fall of the ?60s. CanongateDylan, Bob. 1965. Bringing it All Back Home. Columbia Records

From Where I Sit – Fundamentally Wrong 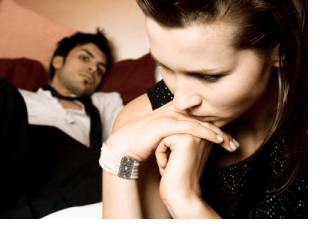 Fiction – The End of the Affair