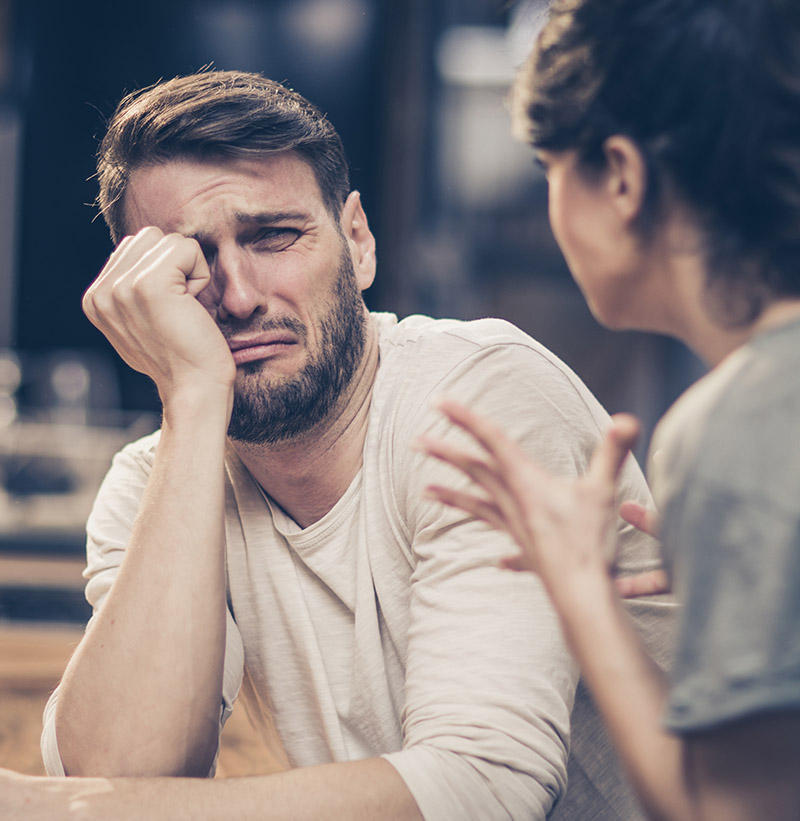 Depressed man feeling fear while his wife is angry at him.

For those of us who carouse the dating scenes, breakups happen.  After all, we could be looking for just the right person, maybe a true love to marry.  No harm in that (for those who save sex for a lifetime partner).

But if you’re married, common-law, or have a multi-year relationship, break-ups crush your soul.  They rip your heart to shreds and leave you numb and aching for months, years, even forever.  And if you have kids, a breakup could lead your little ones down a path of crime, depression, and suicide.  Breakups are not meant to happen.

Yet, breakups are highly preventable, especially if you’ve ever loved the person.

Fiction writer Rayne Hall says, “When lovers break up, they feel intense emotions — whether it’s anger or regret, relief or pain.  Know what your characters feel, and let the reader feel the same” (83%).

I believe all breakups between long-term partners are tinged with regret.  Why?  Because we failed to make it work.  If we had been wiser, we’d still be with our loved one.  Until we learn how to love unconditionally, we might feel the heartache of disharmony in all our relationships.

Breakups hurt.  Rayne Hall adds, “Make the break-up as difficult as possible for the [point-of-view] character.  The reason for the difficulty can be whatever suits the story — love, guilt or fear.  Just don’t make it easy” (86%).

One woman I knew broke up with her husband.  Within a week, her child talked about quitting school and her husband found a new partner.  It was heart-wrenching.

According to Rayne Hall, “If you deal with the break-up in just a few short lines, it won’t convince the reader.  Example: ‘This is unforgivable.  I don’t ever want to see you again.’ ‘As you wish.  It’s over between us’ ….  A reader who sees nothing more than this two-line exchange will expect the couple to calm down and reconcile” (83%).

Even though brief breakups likely end up reconciled, don’t take your chances.  One whisper of “I want to end this” leads to deep-rooted hurt, distrust and perhaps even the end of the relationship.  The end of an intimate relationship crushes the souls of you and those caught in the crossfire.

Insight 3: Breakups are planned in advance.

Sadly, Rayne Hall says, “Genuine break-ups don’t happen on the spur of the moment.  At least one of the lovers has thought the matter through.  The second character may have seen it coming, or may be taken by surprise” (83%).

No-one truly wants to hurt someone they’ve loved.  The sad face and the release of a cry can haunt you for the rest of your life.  But it’s all preventable.

Insight 4: The person being broken up with will have an emotional reaction

Rayne Hall suggests, “The breakupee won’t simply say ‘yes, okay’ at once, but will react with an emotion — surprise, shock, hurt, humiliation, disbelief — before responding.  You can show this emotion with a visceral reaction or with body language.  Then he’ll either accept it, or fight for the relationship” (84%).

Rayne Hall says, “Decide on the emotions for each character.  Choose at least three, although I recommend five or more.  Here are some suggestions to choose from, although you may add others: regret, resentment, hurt, relief, fear, guilt, embarrassment, shame, anger, hatred, longing, despair, pity, hope, humiliation, triumph” (84%).

As for the emotions, Rayne Hall says, “For example, a character may feel guilt, then pity, then relief.  Or he may feel anger at first, then confusion and disbelief, and finally humiliation and hurt” (85%).

One fellow thought that flirting with other women would mend his relationship with wife.  But his flirtations enraged her, caused her to scream.  If you want to mend a relationship, stirring up negative emotions in your partner will only drive him or her away.  You need to fight for your love without fighting, but through giving nothing but selfless love.

“After the breakup,” says Rayne Hall, “If you use the ‘scene & sequel’ format of scene structure, the sequel should be filled with the [point of view] character’s emotions, showing how she feels after the break-up.  Instead of spelling them out, describe them viscerally: Hollow pain ached in her chest where love and hope used to be” (85%).

The heart can twist and ache.  The soul can feel emptied.  If you love your partner, but he or she is not treating you right, chances are you’re not treating him or her right either.  But give 100% pure love, and you’ll see the greatest love bloom and flourish, at least from you and eventually from your partner.

Insight 6: Breakups may not be the end.

Rayne Hall says your character “hopes against hope that things will change in the last minute, and that the break-up can be averted.  This is especially true if they have been together for a long time, if they have planned a future together, or if she loves him intensely … Depending on the genre you write, the separation doesn’t need to be permanent, even though the characters believe that it is.  In Romance, circumstances will change so the two will be united for a … Happily-Ever-After … ending” (84%).

The Marriage Foundation says that if a woman leaves her husband for another man, chances are the relationship is over.  But almost every other case can be saved.  A man who leaves his wife for a younger woman, they say, can still return to his wife if she opens her heart unconditionally.

Letters to the Editor—A Plea to Megan